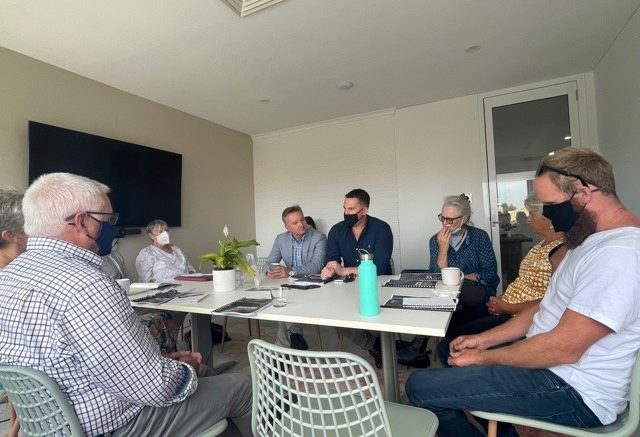 A group of local environmental activists met with Shadow Minister for Climate Change and Energy, Chris Bowen, in Umina last week to discuss the impacts of climate change at a local level.

The roundtable was hosted by Labor Candidate for Robertson, Dr Gordon Reid, at Work Collective on January 20.

Member of Community Environment Network (CEN) and volunteer with Climate Future, Justine Smillie, said residents want stronger action to be taken by governments to mitigate and adapt to climate change.

“The Central Coast is undoubtedly one of the most beautiful areas in the country, with a magnificent coastline, coastal lakes and national parks. However, these features also render the Coast particularly vulnerable to the impacts of a hotter climate,” Smillie said.

“Coastal environments are also under significant pressure from population growth.

“The clearing of native vegetation has accelerated, and the current regulatory framework is clearly failing to stop illegal clearing on private property.

“The Central Coast is in real danger of losing its diverse flora and fauna, largely due to land clearing.”

Labor’s ‘Powering Australia Plan’, which details the Opposition’s strategy in tackling climate change impacts, was discussed at the Roundtable, with participants largely onboard with the targets.

“Whilst the policy might be considered politically ambitious given the woeful treatment of the issue over the last 10 years, Labor’s targets are not sufficient to maintain a safe climate,” she said.

“The evidence is clear, to have any chance of limiting the temperature rise to 1.5 degrees we must reduce emissions by at least 50 per cent by 2030 and achieve zero net emissions by 2045.

“The Environmental Protection and Biodiversity Act (EPBA), the key piece of Federal environmental protection legislation, is not fit for purpose and is failing to protect the Coast’s natural heritage.

“Labor must commit to establishing a Federal EPA and the expansion of the EPBC Act triggers for national oversight to include of land clearing, biodiversity and ecosystems of national importance, water resources, climate change, air pollution and protected areas.”

This was a view shared by a number of representatives, including David Legge from The Killcare Wagstaffe Trust, who said it was imperative for the next Federal Government to develop a set of national environmental standards.

Bowen said it was a “very constructive discussion” and spoke about the importance of hearing from local environmental representatives.

“Local environment groups bring about change -they lobby for change, they protect existing environmental assets, they are hands on in caring for those assets – our environment would be a lot worse without them,” Bowen said.

“Our climate change policy applies to everywhere, but it is particularly important to coastal areas which are in the forefront of dealing with climate change.

“Coal will be part of our energy generation for the foreseeable future but there will be no new coal fire power stations under a Labor Government because that’s not what the economy is delivering so we need to ensure that workers in the coal industry have choices going forward.”

Bowen couldn’t be pressed on what a Labor Government would do to help clean up the impacts left by coal such as ash dams, ongoing air pollution and an inability to fish in certain marine areas.

The Shadow Minister for Environment and Water, Terri Butler, is expected to provide an announcement “in the coming period” about Labor’s plans to deliver a federal EPA.

Gordon Reid said many local businesses rely on the coastline and bushland characteristics for their survival.

“[The] event [is] an opportunity for community and environmental groups such as Save Our Sand, Surfrider Association and local Landcare groups to meet Chris Bowen to …. discuss how we can create new opportunities as we transition to a cleaner energy future on the Coast,” Reid said.

“Climate change and biodiversity loss are major threats to our way of life. Sea level rise, energy costs and supply, flooding and concerns about potential offshore drilling are issues of direct importance to our local Central Coast region.”