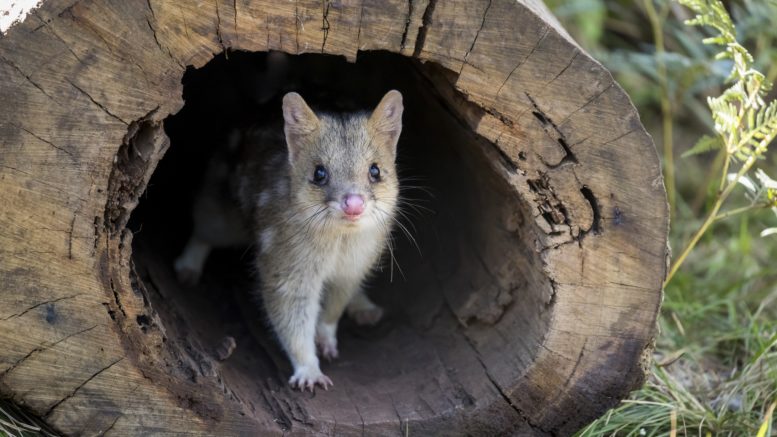 A quoll emerging cautiously, bred and reintroduced into the wild by Aussie Ark.

Aussie Ark was established in 2011 as ‘Devil Ark’, with a focus on saving the iconic Tasmanian devil from extinction. Since then and due to their significant on the ground successes, the role of the organisation has expanded, and now has vision of creating a long-term future for our threatened Australian species through the rewilding of lost or threatened species.

Tim Faulkner, Aussie Ark President said “Our 10-year anniversary provides an opportune time to take a step back and acknowledge all that we have been able to do for wildlife in the last decade

In Aussie Ark’s 10-year history the organisation has increased their land holding by 500%, returned the Tasmanian devil to mainland Australia for the first time in 3000 years, built world class turtle breeding facilities, bred over 400 Tasmanian devils’ joeys, and reintroduced the Eastern Quoll to the Barrington Tops.

During the black summer disaster Aussie Ark were in the thick of it, relocating hundreds of at-risk endangered turtles, rescuing dying platypus and providing supplementary food sources for displaced wildlife.

Whilst the organisation is proud of their successes over the last decade, they aren’t done yet. In the next 12 months alone, Aussie Ark has plans to launch breeding programs for Spotted-tail Quolls, Squirrel Gliders, multiple frog species and the Broad-toothed Rat. They are also in the development phase of the creation of their newest sanctuary Mongo Valley Wildlife Sanctuary.

To raise funds for their work Aussie Ark is conducting an online auction of a special art work by Australian artist, Warren J Fox. The one off art work depicts a young Tasmanian Devil Joey nestled in the Hands of Aussie Ark President Tim Faulkner. The silent online auction will be open for the month of January.

To put in a bid for the work go to the aussieark.org.au

Aussie Ark is a not for profit organisation, which raises the necessary funds to continue its ambitious vision of saving threatened Australian wildlife.

Funds raised allows for the construction of captive facilities and predator proof fencing on semi-wild parcels of land. Aussie Ark is a registered environmental organisation and charitable institution under the Australian Charity and Not-for-Profit Commission.