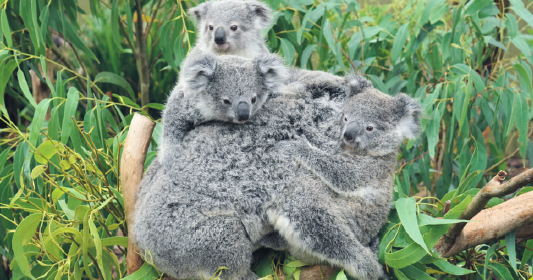 Mother Jill with three babies at the Reptile Park

The Australian Reptile Park at Somersby has withdrawn an exclusive ‘koalas to your room’ program that offered hotel guests a visit from a koala for a cool $2,200 an hour.

The program that was published on the popular tourist and conservation park’s website as late as Tuesday this week,

Looking for something more personal?
Our friendly keepers will come to you with a koala or other native species to let you enjoy the animal in the peace and comfort of your hotel room or home.

Only one koala can be on display for one hour. For display times longer than one hour, multiple koalas must be used and rotated between display and rest.

‘Price includes two staff members and up to one hour of travel time to and from the venue’.

As far as Central Coast Newspapers can ascertain the campaign was kicked off by NSW Animal Justice party Upper House MLC Mark Pearson after some twitter users contacted him asking him to investigate.

Pearson asked the Reptile park to discontinue the practice over social media and on radio station 2SM on Wednesday afternoon.

The information predictably caused a social media storm with many people expressing their disbelief that such a service could legally be offered. The Sydney Morning Herald and other main stream media have since picked up the story.

After the media attention numerous people contacted the ARP to question them on the service. Among them Independent Candidate for Robertson Vania Holt who called on the Reptile Park to review their service.

By the end of Wednesday the ‘Koalas to your room’ service had been taken off the ARP’s website along with a series of similar services called ‘Animals to you’ on the website.

The Australian Reptile Park has been contacted for comment and we are awaiting their reply.