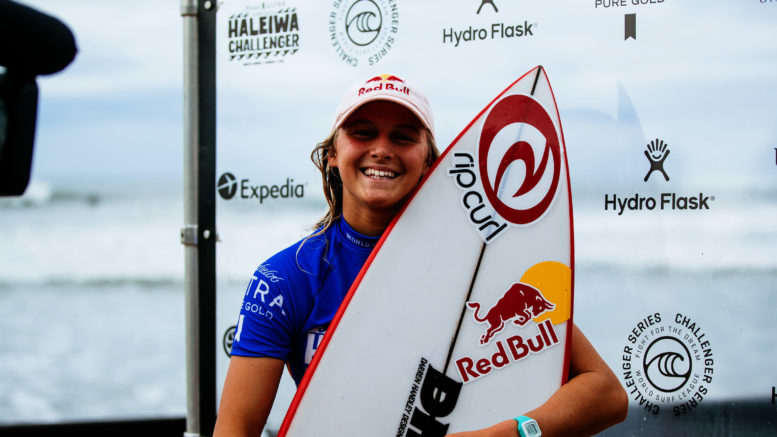 A late withdrawal from the 2022 Women’s Championship Tour (CT) has resulted in the call-up of the Central Coast’s Molly Picklum, who will now enter the top-level World Surf League competition for her maiden year.

After performing with great quality throughout last year’s four-part Challenger Series and placing eighth overall with only seven spots up for grabs, Picklum’s next 12 months was to be focussed on taking her time in taking another shot at CT qualification in 2023.

Now, with 16-year-old American surfer, Caitlin Simmers dropping out of the CT to focus on her development, the spot has opened for Picklum to jump on the world stage and take on the world’s best.

“Although it is eventually a goal to be on the CT, I’m declining the spot for 2022,” Simmers told the World Surf League (WSL).

“I’d like to work on my surfing, spending time with my family and friends, and school, to be more mentally and physically ready to face that challenge.”

With a late call-up secured, Picklum will seek to improve on sturdy results achieved last year, including Qualifying Series wins at the Great Lakes, Tweed Coast and Central Coast Pros.

Mid- to high-range rankings in the first three Challenger Series events – largely due to underwhelming surf conditions, unfavourable for this strong rail turning prodigy who shines in big swell – culminated in a semi-final placement at the Haleiwa Challenger on December 6.

It was, to date, the most prestigious achievement in her short career, but also perhaps her most heart-breaking: ending with a slip on her final wave that quelled one last opportunity to achieve the necessary ranking for qualification within the CT.

A shift in fortunes has given Picklum the shot she thought she missed, but with it comes high expectations beginning back in Hawaii with the Oahu Pipeline Pro from January 26 to February 10.

“I’m so excited and grateful for the opportunity to be on the CT in 2022, competing alongside the world’s best really is a dream come true,” said Picklum.

“Qualifying was the next step for me, my team and I have worked so hard for this.

“I feel ready to go and can’t wait to get started in Hawaii in a few weeks’ time.

“I wish Caity all the best for her career, she is an incredible surfer and I have no doubt we will have many years on tour together.”

The opening Pipeline Pro will see the world’s best surfers converge on the birthplace of surfing in Hawaii’s North Shore.

It will also be the first time in WSL history that the women’s CT event will run alongside the men’s, marking a significant step up in the competition’s quality to be tested on notoriously large waves.

An equal share of prize money will be offered in both events.

All this promises for an exciting start to the new year’s CT, a competition that is scheduled to run through 11 stops across the globe from January to September.