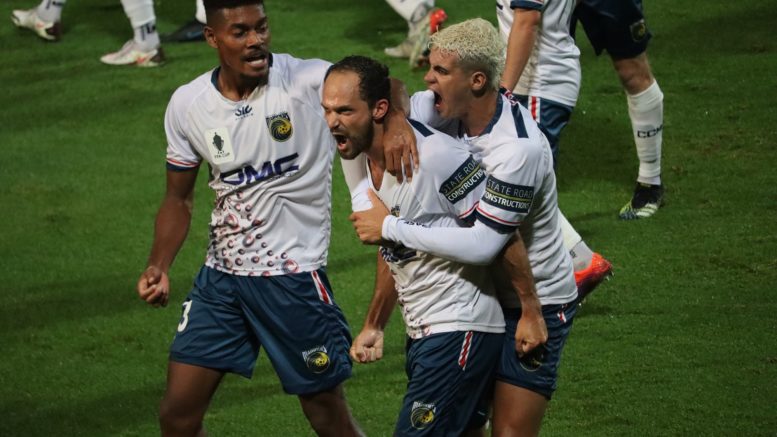 Tuesday night’s semi-final clash ended with a 1-0 win for the Central Coast Mariners over Sydney FC, putting the boys in yellow into their very first FFA Cup Grand Final.

It was a rain-soaked field greeting both teams at Jubilee Stadium in Sydney on January 18, causing an entangled mid-field scrap for 90 minutes, with Marcos Ureña’s winning penalty goal coming toward the end in the 82nd minute.

With possession, passing and tackling stats almost entirely even between two well matched and disciplined sides, the Mariners were nonetheless the team making more inroads on goal ending in shots on target.

Sydney FC goalkeeper, Andrew Redmayne, deserves credit for keeping the scores deadlocked for most of the match, making two particularly difficult close range, one-on-one saves against Matheus Moresche in the second half.

Prior to this, opportunities on goal were few and far between, a testament to both sets of hard-working defensive units, adamant about keeping the slippery ball away from their respective goalkeeper.

The fitness of the Mariners prevailed in the end, notably when Mariners right back Lewis Miller forced a costly mistake made by Sydney left back Joel King.

Miller’s surging run down the side of the field skimmed past King, who stuck out a foot and clipped the back end of the advancing Mariner as he flew past with the ball.

Sydney fans were grieved to hear referee Alex King’s whistle blow and his hand point to the penalty spot, especially considering replays showed the foul to have potentially been committed on the outside of the penalty area.

Redmayne’s preparation for the shot was peculiar, attempting to disturb Ureña’s composure by waltzing to the side-post and back to the middle.

The penalty shooter was undeterred and struck the ball hard and low down the middle line, skimming its wet surface between Redmayne’s legs.

The roar of Ureña with his team in pursuit expressed their great passion in what would take a further 10 minutes of high-energy defending to confirm: the Mariners were set for their first FFA Cup Grand Final in the Australian tournament’s growing history.

The details of this match are still in the making and will not be confirmed until a result is settled in the second semi-final between Wellington Phoenix and Melbourne Victory.

Both teams present a step up in competitive challenges for the Central Coast underdogs: the former having already defeated the Mariners in November of last year and the latter currently sitting atop the A-League ladder.

The squad will continue their weekly training schedule and await news on the resumption of their A-League season after an unsought hiatus due to returning COVID concerns.

Form is at an all-time high for the boys in yellow, leaving the future to show whether their young squad can continue to live up to rising expectations.