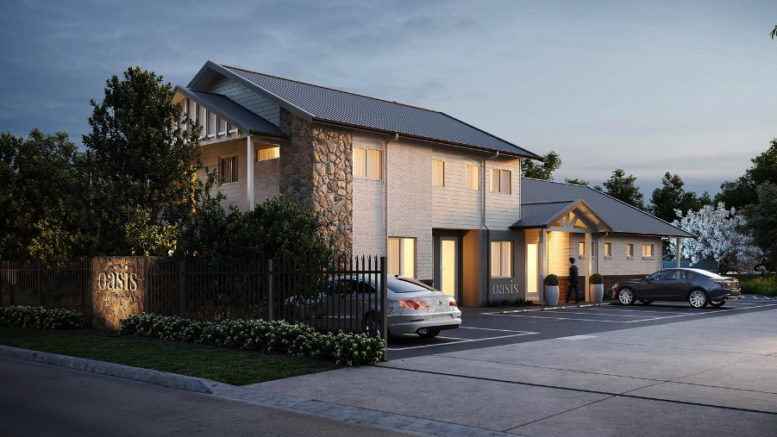 An application to make amendments to a development application for a relocatable home village at Lake Munmorah, originally approved in 2015, has been advertised by Central Coast Council.

Documents submitted to support the Section 4.55 amendment to DA/457/2014/C state that the application was approved for a manufactured home estate (MHE) and community title subdivision at 205 Elizabeth Bay Drive, Lake Munmorah.

The latest application to amend the MHE proposes changes to the manager’s residence, community building, incorporates additional MHE sites and gives insight into an ongoing stoush between the applicant and Central Coast Council about whether or not manufactured homes can be constructed on site.

“The modification seeks to provide an improved design for the approved community building and incorporate the site manager’s residence into a second storey above the community building,” the latest application said.

“The proposal also seeks to establish three additional dwelling sites in the location of the approved manager’s residence and within a vacant parcel of land in the eastern corner of the site,” documents lodged to support the application said.

The applicant has argued that the proposed modifications represent design refinements and improvements to the approved development that arose during the detailed design process that took place after consent was given by the former Wyong Council.

“The modified development will provide a greater level of amenity to residents and increases the efficiency of the site use.”

DA/457/2014 was approved on 13 May 2015 for a Manufactured Home Estate and community title subdivision incorporating 52 dwelling sites and ancillary facilities and works.

The amended application still includes a community building; manager’s residence; storage shed; 21 parking spaces and removal of the majority of vegetation on site.

The provisions of SEPP 36 are now integrated within State Environmental Planning Policy (Housing 2021).

DA/457/2014 has already been amended three times with approval of Central Coast Council  to permit the removal of native vegetation, to stage the construction of the MHE and then in 2019 to increase in the number of sites from 52 to 55, amend the road layout, consolidate stormwater basins, reduce and relocate parking, remove an RV parking area and shed among other amendments.

The majority of the vegetation has already been removed from the site and the proponent has proven commencement.

The latest proposal includes the construction of three additional dwelling sites including two sites in the location of the approved manager’s residence and one in a vacant area in the eastern corner of the site.

“The proposal seeks to amend the community building to provide an improved communal facility which provides a high level of amenity and is consistent with contemporary market expectations,” the latest application said.

The applicant has included revised plans for landscaping and fencing to provide “appropriate visual softening the community building and manager’s residence.”

This latest modification was submitted concurrently with an application to operate the approved MHE under S68 of the Local Government Act 1993 (LG Act).

The applicant states that this latest amendment does not seek permission to construct manufactured homes on site but goes on to say “Notwithstanding this, it is proposed that condition 94 of the consent which restricts the onsite construction of dwellings is reworded to allow the consideration of this matter in accordance with the relevant procedures established by the LG Act and the Regulation”.

During this period the construction company, Mavid Properties, lobbied the Department of Premier and Cabinet ”to raise the issue of constructing dwellings within a MHE on-site, as is common across NSW, with the exception of the Central Coast LGA.

“Mavid was advised to submit a business case to DPC for consideration, which was duly done …Mavid Properties had also engaged Interface Planning to assist in this matter.

“Interface Planning was later informed by DPC that they had spoken to officers within the Department of Planning, Industry and Environment (DPIE), who were familiar with numerous other examples across NSW where exemptions were granted to allow for the construction of dwellings within a MHE had been granted, and the process to achieve this outcome.

“As the applicant was compiling additional information requested by Council, Council proceeded to determine (Refuse) DA/457/2014/D on December 1, 2020, prior to this information being submitted.

In early 2021, Mavid Properties alerted Regional Development Australia (Central Coast) to this “missed opportunity” of a stalled project with a Capital Investment Value of nearly $20M, potential to create 70-80 FTYE construction jobs and significant investment on the Coast.

“This matter remains on the ‘radar of RDA CC,” this latest application notes.

“In September-October 2021, Interface Planning approached the Department of Regional Development NSW to raise this “missed opportunity” of a stalled project and potential to create construction jobs and significant investment on the Coast.

“In October 2021, Interface Planning was contacted by DPIE’s Planning Delivery Unit to clarify particulars of this project.”

In November Interface Planning discussed this proposal with Council’s Development Assessment Team Leader, specifically the process/pathway to seeking approval to construct homes within a MHE on-site, as is occurring on multiple locations across NSW, with the exception of the Central Coast LGA.

Council’s DA Tracker says the latest application was advertised on December 23 but as of January 17 no submissions (for or against the latest amendments) had been uploaded to the DA Tracker.