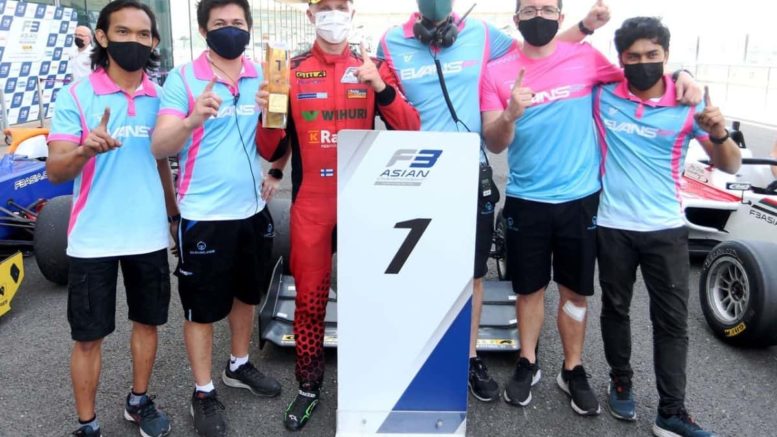 Josh Evans with members of his team

From the comparatively sleepy streets of Gosford, Josh Evans has launched a successful international motorsport career.

Evans is the man behind Evans GP, a junior formulae team campaigning successfully in Asia.

His operation goes toe-to-toe with powerhouses like Prema and Hitech Grand Prix, squads which are active in a multitude of categories globally, including the Formula 2 Championship.

There is, however, an important point of difference with Evans GP in that it’s independent.

Where others have direct links to academy programs with Red Bull, Ferrari, or others, Evans’ squad affords youngsters a means to prove their worth outside of that framework.

Evans said his team is a good proving ground for youngsters looking to make their mark.

“Isack Hadjar, who drove for us last season, wasn’t aligned to any F1 programs, but he did a good job, got a few podiums, and now he’s been picked up by Red Bull,” he said.

“So, if you don’t have an alliance with any program, we can be a good place to start and show what you can do.”

Evans has a proven track record of success, dating back to his formative years fielding a Formula Ford for David Reynolds.

“I did the motorsport course at Wodonga TAFE, then ran David Reynolds in Formula Ford when he first started out of go-karting,” he said.

“He won the championship that year.

“Learning from Michael Ritter, I did a few years there and then went to the UK and worked for Allan Docking.”

Returning home, Evans founded his own Formula Ford operation, fielding such racers as Nick Cassidy, Andre Heimgartner, Thomas Randle, and Chelsea Angelo before closing the team following the emergence of Formula 4 on the national scene.

Then came the opportunity to manage BlackArts Racing Team in China, a role which laid the groundwork for the founding of Evans GP.

“I feel like we achieved what they could do; we’d won the China F4, Asian Formula Renault, and then in 2019/20 we won the Asian F3 Championship,” he said.

“So I felt like if I want I want to take the next step and (go) in the direction that I wanted to, the next step was to go into ownership where I have complete control.

“It was a big jump, but it’s the same championship, the same cars, I know the organisers as well.”

Having taken the leap into team ownership in 2020, Evans is now eying future growth for the operation, currently based in Asia.

He hopes in time to head into Europe.

“Just like drivers that want to go as far as they possibly can, I want to push this team as far as I can,” he said.

“We want to make sure we tick the boxes in Asian G3 first – we want to go and win the championship, as Evans GP.

“After that we’re going to look at what other opportunities are.

“Probably the next logical step is doing something in Europe, so I’m doing my homework on that at the moment.

“Australians, New Zealanders, that part of the world, it’s quite competitive racing there, and there’s no reason why we can’t do that in other parts of the world.”

Recently home for Christmas, Evans is now in Dubai preparing his team for the first round of the 2022 Asian Formula which starts this weekend.

Evans’ love of racing began at an early age.

“I remember as a child pulling apart and building billy carts and BMX bikes and racing the other kids in my street,” he said.

“What I look for in a driver is natural talent and the right attitude; I know it is a bit of a cliché but without these two ingredients it is difficult to perform on track.

“They have to be willing to do whatever it takes to be successful.”

Evans said the Asian series is managed professionally by ex-racers and is recognised by the FIA on its road to F1 pyramid.

“And I think the series provides a great opportunity for drivers looking to gain experience in a car that is also used in Europe, competing at F1 and Grade 1 circuits for a fraction of the cost to race in Europe,” he said.

“It is the ideal steppingstone between F4/Formula Ford and F3 in Europe.”

“In the short term we aim to win the Asian F3 Championship.

“We were able to achieve multiple race wins and finished second in the team’s championship in our first year of competition.

“We have identified numerous areas in which we can further improve so it is only natural that we aim to win the title next season.”

Evans said Covid travel restrictions have made racing quite difficult, with much uncertainty and calendar changes.

“This made it quite difficult to attract drivers and some potential drivers weren’t even allowed to leave their home countries,” he said.

“It’s also had an impact on our staff and budgets as we have had to arrive at events much earlier than usual as well as quarantine for long periods after the season.”