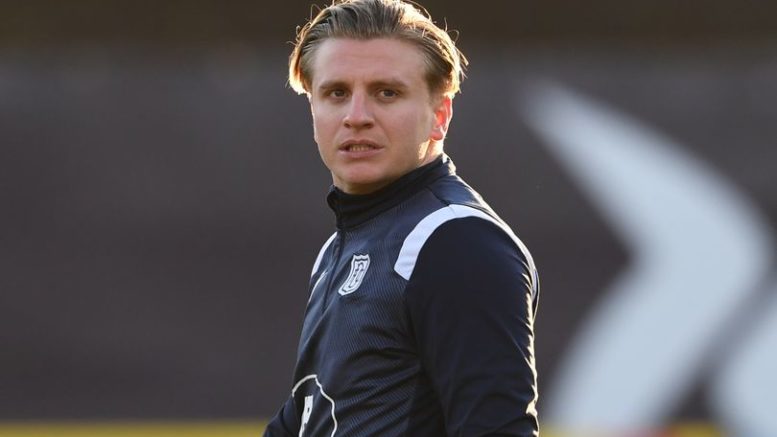 Jason Cummings to join the Mariners

Scottish international and Australian passport holder Jason Cummings has signed an 18 month deal with the Central Coast Mariners during the January transfer window.

The striker joins the club from Dundee in the Scottish Premiership where he was a key part of the squad that earnt promotion back to the topflight and was the joint-top scorer in his side.

The Scottish born goal scorer has picked up international caps for Scotland under-21s and made two appearances in friendlies for Scotland, however he remains eligible to play for the Socceroos.

Jason began his career at Hibernian where he made over 100 appearances and scored 55 goals and put himself into the history books when he was in the side that beat Rangers to Hibs’ first Scottish Cup in 114 years, and in 2017 became the first player since 1961 to score more than twenty goals in a season for Hibernian.

After moving around the United Kingdom for clubs including Nottingham Forest, Luton Town, Peterborough and Rangers, where he netted a hat-trick in the Scottish Cup quarter final, Cummings found his way to Shrewsbury Town which led him onto a move back to Scotland at Dundee.

Dens Park was a happy return for Cummings where he finished his inaugural six months with the club on eight goals despite only playing 15 matches after joining in the January transfer market.

Cummings has always believed that he has the ability to play for the Socceroos and is relishing the opportunity to come to Australia to change his image and create a fresh start as a footballer.

“I am really excited to further develop my football here in Australia. I have only been here a couple of hours and really looking forward to getting straight into training with my new team mates.

“I am not taking this opportunity lightly and want to reward the Central Coast Mariners. Being an Australian citizen, I knew it was only a matter of time until I came out here and I am ready to make an instant impact and show people what I can do,” Cummings said.

Head Coach Nick Montgomery is looking forward to having the striker in the squad with injuries and COVID-19 illnesses impacting selection choices.

“We did our due diligence and spoke to numerous people who know Jason personally and the feedback was that he is a very talented player who has not reached his undoubted potential, but a fresh start here in the right environment can be the making of him.

“We fought off interest from numerous clubs vying for his services and after speaking with Jason many times via zoom and on the phone, I am in no doubt he will be a massive asset to the club. At 26 he is a great age coming into his prime and his goal scoring record speaks for itself.

“With the absence of Matt Simon and having one of the smallest squads in the competition, Jason is coming in at the perfect time as there will be plenty of games to play and we will need as many fit players as possible with the ongoing COVID situation. We can’t wait for Jason to join the club this week and integrate with his new teammates who are looking forward to his arrival,” Montgomery concluded.

Mariners’ Head of Football Ken Schembri is excited to see Jason show his talent around the country and demonstrate to others what he possesses in his locker.

“Jason provides our club with more power and experience in our attacking zone. He joins the Mariners at the perfect time with plenty games coming thick and fast.

“Clearly the ongoing covid situation with have a huge impact on this season and depth in squads will be vital to our success.”

Jason landed in the country last night and will join up with the team this week.