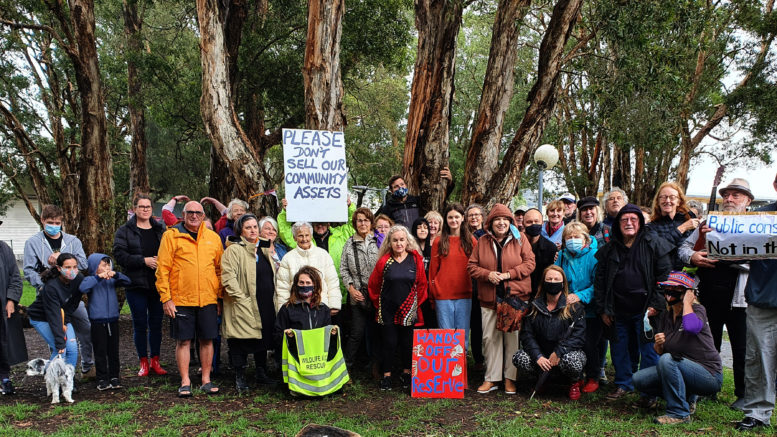 At least 50 concerned residents gathered to protest the proposed sale of part of the Austin Butler Reserve in Woy Woy on the wet and blustery morning of Saturday, November 27.

The protest was the continuation of the #stoptheselloff community campaign that has been ongoing through 2021 to attempt to stop the sale of some of the assets Central Coast Council had listed as surplus to needs and appropriate to be sold.

Council’s aim was to sell between $40M and $60M of surplus assets to assist its financial recovery following the October 2020 cash crisis.

The event was organised by multiple community groups including the Central Coast Branch of the Australian Conservation Foundation, the Community Environment Network, Wildlife Arc, GUST and WIRES.

Activist, Joy Cooper, said the event was intended to inform people that the land had not yet been sold off.

“The Central Coast Council Administrator, Rik Hart, made it clear that it was up to the community to decide what happens to this reserve,” Cooper said.

“The proposal requires a reclassification of the land, a rezoning of the land and an independent person to consult with the community,” she said.

“Despite rumours that is had or will be sold, the community can make a difference and stop this sell off.

“It was not part of the original tranche of assets for sale but there was an unsolicited approach for it to be sold off.

“The current proposal appears to land lock areas behind the oval for car parking.

“From the maps that have been provided the proposal goes across the access road and removes Melaleuca and Swamp Mahoganies which are food sources for the grey headed flying fox, many native birds and other bats.

“This part of the reserve creates a green buffer between the car park and oval.

“If it was sold privately it would stop residents from accessing or taking the back pathway through from Brick Wharf Rd and Oval Avenue to Blackwall Rd at a time when Council’s CEO is saying Woy Woy could be a walkable community.”

The protest included gathering signatures for a petition to oppose the planning proposal to rezone the land.

“Rather than be on the backfoot when the consultation comes out we are collecting signatures now from the community that uses the space,” Cooper said.

“The Peninsula is a heat sink and is in need of more trees, not mature trees being cleared and it would take decades for trees to be at the size they are at now,” she said.

The party interested in purchasing the treed reserve from Council is Woolworths to expand its carpark and create a truck turning area for delivery vehicles.

A solo guitarist, Dennis Aubrey, led the crowd in a heartfelt rendition of Big Yellow Taxi and the rain and wind did not dampen the community’s enthusiasm for protecting the green space at Austin Butler Reserve.