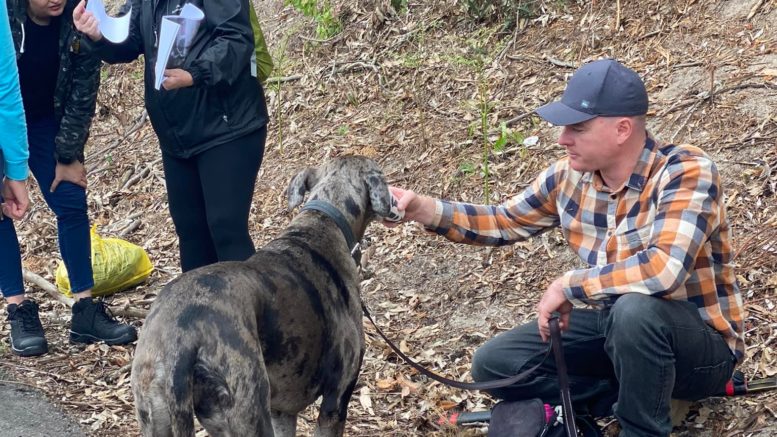 Losurdo was last seen at about 1:15am on November 26, 2021, on Pebble Beach Avenue, Magenta, walking in the direction of Wilfred Barrett Drive.

He has not been seen or heard from since.

A Looking for Logan facebook page was started on December 3 and within a 24-hour period on December 5 the community raised $2,300 to pay for a drone and drone operators to join the search.

It was confirmed on December 3 that his shoes were found on a beach and that his windbreaker jacket was found in a second location not far from the shoes.

Friends have posted a video of Logan delivering the keynote speech at the AVID Australia Summer Institute in 2018.

“This video shows you what an amazingly, strong, brave and resilient young man Logan is,” the accompanying post said, “he is worth every second of this search.”

The search was to continue out of the North Entrance Surf Club from 9am on Tuesday, December 7.

Investigators released images of a white vehicle which was seen on Magenta Drive shortly before 1:10am on the morning of the young man’s disappearance.

The footage shows a man getting out of the vehicle, speaking with Logan and then getting back into the car and driving away.

There is no suggestion this vehicle or person is involved in Logan’s disappearance, however detectives would like to speak to the man as they believe he could assist with their inquiries.

Losurdo was reported missing to police at about 8:15pm on November 27 after failing to attend work, with officers attached to the Tuggerah Lakes Police District commencing inquiries into his whereabouts.

Officers, with the assistance of SES volunteers, PolAir, Water Police, Marine Rescue, NSW Surf Lifesaving and the Volunteer Rescue Association have conducted extensive land and sea searches in the Magenta and The Entrance areas, with some of Losurdo’s personal belongings being located along Hutton Rd, The Entrance North.

Losurdo is described as being of Caucasian appearance, between 170cm to 190cm tall, of medium build with black curly hair and brown eyes.

He is known to frequent Erina and The Entrance.

As enquiries continues, police are urging anyone who may have dashcam footage or CCTV from Wilfred Barrett Dr, Hutton Rd or Stewart St between 12:30am and 6am on Friday, November 26, to contact Wyong Police or Crime Stoppers on 1800 333 000.

Information reported to Crime Stoppers is treated in strict confidence.

The public is reminded to not report information via NSW Police social media pages.