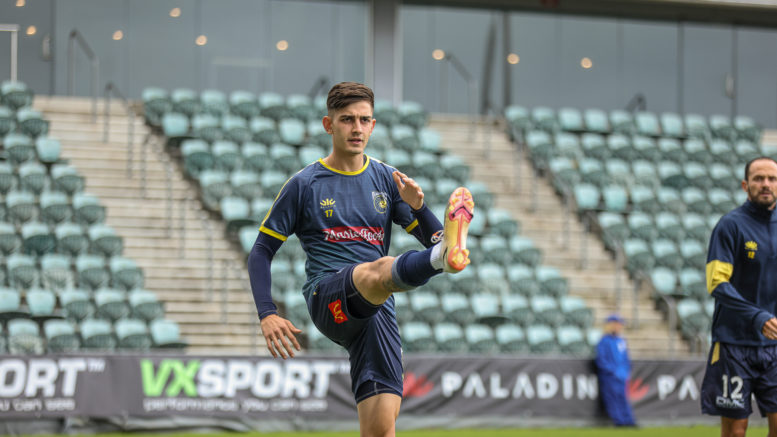 Mariners scholar and first-team debutant, Damien Tsekenis, during warm up

The Central Coast Mariners suffered their first competitive defeat this season in their A-League Round Two match against Wellington Phoenix, losing 2-1 in Wollongong.

Played at the Wollongong Showground throughout feisty coastal winds on Saturday afternoon, November 27, both teams fought hard for chances against the other’s strong defensive unit.

Head Coach, Nick Montgomery, renamed 10 of the 11 starters from last weekend’s win against the Jets, replacing the injured Béni N’Kololo up front for first team scholar and debutant, Damien Tsekenis.

In front of goal, the young scholar connected well in passing play with fellow front man, Marco Ureña, and showed a willingness to advance on the Phoenix defence with the ball.

Yet the first half finished goalless despite promising attempts from both teams: Ureña and Oliver Bozanic came closest for the Mariners with powerful shots from outside the box, whilst Jaushua Sotirio maintained the Phoenix threat with multiple near misses of his own.

The deadlock was broken early in the second half by Gary Hooper for Wellington who was the first to reach the loose ball in the penalty box after Kye Rowles’ corner clearance inadvertently hit Ureña and rebounded back on goal.

Both Mariners players were quick to make up for this blunder with an equaliser only four minutes later, utilising an effective high press in defence to force an inexcusable mistake from Phoenix defender, Joshua Laws.

A long ball forward from Rowles was hotly sought by Ureña who cut out the reckless back pass from Laws and clinically passed the ball around goalkeeper, Oliver Sail.

This opening season goal brought shooting confidence for the Costa Rican striker, prompting him to take further chances and come close to a second score.

However, it was Sotirio who next tallied his season’s first in the 63rd minute, profiting from a mean deflection against Jacob Farrell’s leg to turn the ball into the far bottom corner of the net.

The Mariners responded positively and started to gain the upper hand in possession and shots on goal.

The entrance of Matheus Moresche and Woy Woy’s Matt Match for Tsekenis and Cy Goddard brought more energy to the attack and later, Harrison Steele from Terrigal was given his second run in as many games.

In the end, it was not enough to undo Wellington’s lead, although the sharp goalkeeping of Mark Birighitti prevented a third conceded goal after Rowles gave away a penalty in the game’s final minutes.

Monty was disappointed in the end result although noted some positive take-aways for his team, particularly Tsekenis’ first A-League appearance.

“I thought Damo for his debut was very good,” spoke Monty at Monday morning’s training session.

“A couple of times he got himself into good positions in the box and unselfishly laid it off for the edge of the box shot.

“He needs to be a little bit more selfish at times but I thought his work rate was good, he took a lot of experience from that game and he’ll grow from it.”

Due to the loss, the Mariners have dropped down to fifth place with Wellington in third, and Melbourne Victory in the lead as the only team to have won two out of two matches.

Now, a quick turnaround is desirous for the boys in yellow ahead of their mid-week FFA Cup Round of 16 clash against the Wollongong Wolves, followed by the weekend’s A-League Match Week Three contest against Macarthur FC.

“We’ve got three games this week, we knew that, though obviously we take one game at a time,” continued Monty.

“I wanted competition for places at the start of the season, we got that, and games like this are an opportunity for a few to come in and really put their hand up for a shirt in the Macarthur game.

“We’ll go there with full confidence to take the game to Wollongong which will be a physical game, should be a good crowd, and it’s one which we’re really looking forward to now.

“The beauty of football is there’s always a game a few days later and we’ll be preparing for that today.

The former of these games will again be played at the Wollongong Showground on Wednesday, December 1; the latter at Panthers Stadium on Sunday, December 5.