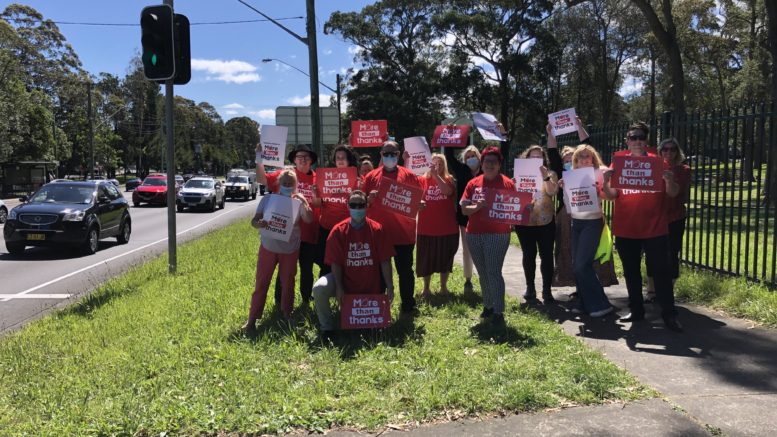 The NSW Teachers Federation Council on Saturday, November 27, voted unanimously to strike for 24 hours on Tuesday, December 7, over the NSW Government’s refusal to lift salaries and reduce workloads for teachers.

Gemma Burrows, President of Gosford Teachers Association, said schools on the Central Coast were not immune to the serious issues confronting public education in NSW.

“The crisis in our schools is escalating and the shortage of teachers is impacting on our students in every school on the Coast from the Peninsula to Wyong,” Burrows said.

“Along with this crisis the administrative workload of teachers has escalated to the point it is now untenable.

“What I see in my teaching colleagues is absolute exhaustion.

“To keep teachers in our profession and attract the best into our profession the NSW Goverment must listen to our demands, pay teachers more and reduce our workload,” she said.

A confidential government document warns NSW has a large and growing shortage of teachers and says the state could miss out on more than 3,000 teachers unless a drop of almost 30 per cent in the number of people studying to become a teacher is reversed.

The information is contained in a briefing document prepared for the secretary of the Department of Education in July ahead of a meeting with a panel conducting a national review of Initial Teacher Education.

The speaking points for the meeting state: “As with many other jurisdictions, NSW is facing a large and growing shortage of teachers, in specialisations like STEM and inclusive education, in rural and regional areas, and secondary.

The briefing also warns enrolments in Initial Teacher Education (ITE) courses have fallen by almost 30 per cent, contributing to teacher shortages and adds: “Failing to respond to projected reductions in ITE enrolments in NSW is likely to mean a loss of over 3,000 potential teachers by 2030.”

In releasing the document, NSW Teachers Federation President, Angelo Gavrielatos, said it proved  the scale of the staffing crisis in schools.

“This document shows there is a large and growing shortage of teachers and a huge drop in enrolments in teacher education courses that are making the problem worse and could cost us more than 3,000 teachers,” he said.

“The only way to stop the shortages and recruit the teachers we need is to invest in teachers through more competitive salaries and lower workloads.”

The Department of Education warned in August last year: “On average, teacher pay has been falling relative to pay in other professions since the late 1980s and this makes it a less attractive profession for high achieving students.

“The demands and expectations on teachers are increasing, while the current rewards, pathways, and learning opportunities are not providing enough incentive.”

Gavrielatos said the government’s wages position had not changed since 2011, despite all the evidence that shortages were hurting students and uncompetitive teaching salaries were turning people off joining the profession.

“The 2.5% wages cap is the problem, not the solution,” Gavrielatos said.

“Maintaining a wages cap in the face of a dramatic decrease in the attractiveness of the profession, rising shortages and at a time when you need to recruit thousands more teachers is a recipe for disaster.

“Mr Perrottet is putting at risk the education of a generation of kids.

“The Department of Education warned last year NSW could run out of teachers in five years if action is not taken.

“A major study of NSW teachers found they are working 55 hours a week on average and the government’s own just released survey shows only one third of public school teachers have time to do their job well.

“In line with the recommendations of the Gallop inquiry, teachers and principals are seeking a salary increase of between 5 to 7.5 per cent a year to recognise the increase in their skills and expertise and begin to reverse the decline in teachers’ wages compared to other professions.”