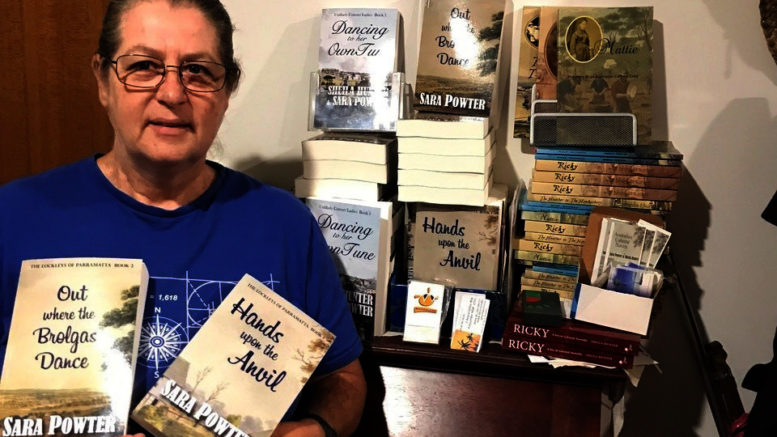 Sara Powter with some of the books

Sara Powter of Kincumber little suspected that COVID-19 lockdowns would see her emerge as a prolific novelist – but that’s just what happened.

It all began with three manuscripts which had been left to her by her late mother, Sheila Hunter, penned after family history research done by mother and daughter revealed four convict ancestors.

“Mum had left the manuscripts of a trilogy she had written with me a year or so before she died in 2002,” Powter said.

“I didn’t do much with them for some time – they just sat in my office for 10 years or so.

“One day I decided to see what I could do with them – they were in hard copy and the third one was hand-written, but I did a lot of work editing them and finishing uncompleted chapters and eventually ended up with a trilogy which I ended up publishing on Amazon.”

The three books – Ricky, Mattie and The Heather to the Hawkesbury – were published in 2014, 2015 and 2016 respectively, weaving fact with fiction in colonial tales based on Hunter’s own ancestors, who progressed from their convict status to become some of the leading citizens of the Parramatta and Emu Plains areas.

“I became so interested in the process of writing and my own family history that when the first lockdown happened last year I decided to try my hand at writing some books of my own,” Powter said.

Since then she has written eight books.

Two of them, Dancing to her own Tune (co written with her mother, who had written around 30,000 words and a synopsis for what would have been her fourth book) and Amelia’s Tears, serve as prequels to her mother’s trilogy and the remaining six follow more of the family’s adventures in the early days of colonisation.

“Over 200 years have passed since the first arrival of our family on this beautiful but rugged shore,” Powter said.

“I will never regret that they came as convicts; I’m proud of that.

“They were ripped from their loving families’ arms, never to return.

“Most were sent for very petty crimes; it made them strong and resilient.”

“The books are all in the Australian colonial genre – they’re not romances, more like a step back in time.

“I can’t believe I only really started writing in September last year and I have just finished my eighth book – that’s around 1.2 million words in 14 months.

“When I started to write the words just flowed.

“I love it but it is obsessive.

“I sit down after breakfast with a thermos of coffee and start writing.

“My husband can be out for three or four hours and I won’t even know he’s gone.

“The next thing I know it’s dinner time.”

All of Powter’s books are available on Amazon and are expected to be available in local bookstores next year.