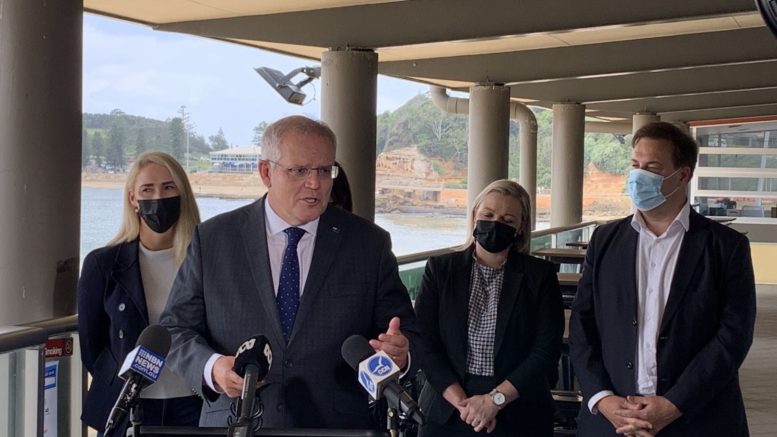 The Federal Government has taken the first steps towards cancelling the PEP-11 permit for off-shore gas exploration over an 8,200 square metre area stretching from Newcastle to Wollongong, with the Central Coast a likely drilling site.

The permit expired in February, with an application for renewal by Advent Energy hanging in the balance for 10 months as environmental groups and residents waited for Federal Resources Minister, Keith Pitt, to sign off on a refusal.

Prime Minister, Scott Morrison, was at Terrigal on December 16 to announce the Government, which includes Minister Pitt, has advised NSW Deputy Premier Paul Toole as the joint authority partner, as well as the National Offshore Petroleum Titles Administrator (NOPTA), of its intention to refuse the renewal application.

“Gas is an important part of Australia’s current and future energy mix but this is not the right project for these communities and pristine beaches and waters,” Morrison said.

Morrison said the major reasons for refusal were high levels of community opposition and the fact the Government is not satisfied that the applicant is able to raise sufficient funding to progress the work program in a timely manner and in the timeframe of the permit conditions.

Environmental groups and residents have cautiously welcomed the announcement.

Save Our Coast, which has been agitating for several years for the cancellation of the permit, said the announcement was not a “final result”.

SOC Director, Peter Morris, said an official notification of formal refusal would be “a fantastic outcome” for coastal communities, the environment and marine industries including tourism and fishing.

“The good news is that the Federal Government has written to NOPTA and to the NSW Government saying that it intends to refuse the application to renew the permit,” he said.

“The first reason it cited was the high level of community opposition.

SOC founder, Natasha Deen, said she was “ecstatic” to hear the permit would not be renewed and awaited formal confirmation.

“Many thanks to our members, the general public, our campaign partners Surfrider Foundation and the many MPs who have spoken and acted against PEP11,” she said.

SOC Northern Beaches Convenor and environmental lawyer, Kristyn Glanville, said Advent Energy had 30 days in which to appeal once it has received a notice of intention to refuse the application from NOPTA.

“Advent Energy, or some other petroleum exploration company, may make a new application to carry out exploration in the exact same location,” she said.

“We can never be sure that a project like this won’t take place in the future.

“We continue to call upon the Federal Government to exclude this region from the offshore petroleum titles legislation, and permanently safeguard the east coast from this kind of use.”

Member for Dobell, Emma McBride, was also cautious in welcoming the announcement, saying it is not “an official end to PEP11”.

“Now, on the eve of an election and 10 months after the original deadline, we learn the Government has an ‘intention’ to stop PEP-11.

“But the Government has made promises like this before and failed to follow through so how can our community trust this announcement?”

Federal Labor Leader, Anthony Albanese, said while he welcomed the announcement, it was 300 days overdue.

“Extending PEP-11 has never made sense from an economic, environmental, or energy perspective.

“It would have put at risk thousands of local jobs in tourism, hospitality, and recreational and commercial fishing.”

Albanese said the Government had left the community “in limbo” for too long and he looked forward to official confirmation PEP11 has been rejected “once and for all”.