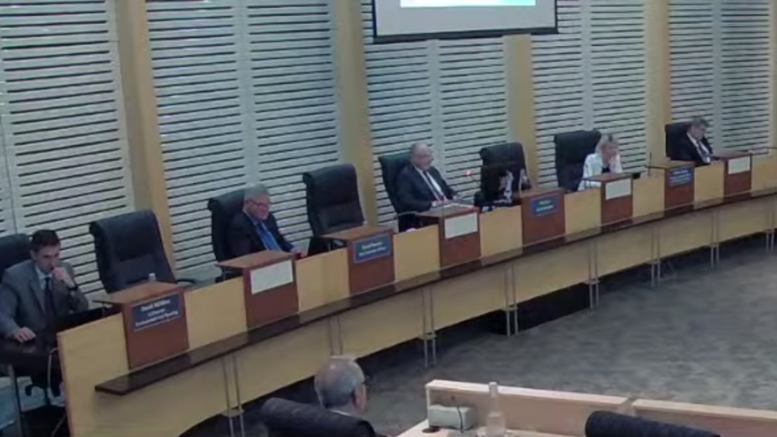 A group of residents from Ourimbah were facing a last-ditch attempt to hold off a masterplan for Ourimbah that Central Coast Council was due to adopt on December 14.

Ourimbah Region Residents’ Association (ORRA) were hoping to convince Administrator Rik Hart to send the plan back to the town planners for further work.

“Mr Hart is voting on what is actually contained in the plan, not what staff are advising him is in the plan,” ORRA member Brian Davies said.

“I recommend that he read and understand it and do a site visit to understand the issues that the community are raising about steep hills and fire and flood threats that make the proposed plans dangerous and unworkable.”

ORRA wants a masterplan which has a coherent vision for the future of Ourimbah; that reflects the community values of the residents of Ourimbah and provides certainty for any Local Environment Plan and Development Control Plan changes.

ORRA says the masterplan does not reflect the extensive community consultation held after the Councillors’
2019 decision.

“Ourimbah Region Residents’ Association (ORRA) ran a survey across the whole Ourimbah region to be sure we were presenting a consensus community view,” ORRA said.

“We liaised with Council staff and elected Councillors over a period of months and believed we had achieved a result that would suit all parties.

“None of this consultation is mentioned in the plan and most of the community feedback has been ignored.”

“On 27 April 2020, the then elected Councillors unanimously resolved to support the concerns of the Ourimbah Region Residents Association about the Masterplan by limiting building heights and protecting the heritage of the area,” he said.

“Surprisingly, the April resolution was not referred to in the six page report prepared by Council staff for tonight’s meeting.

“Ourimbah residents are rightly concerned that Council staff are seeking to ignore a legal resolution and direction made by the elected Council about the Masterplan.

“The Administrator should not adopt the staff recommendation without referencing the April resolution and confirming its continuing application.”

Speaking in State Parliament in May this year, Mehan said the Ourimbah masterplan had benefited from Councillor input to staff recommendations.

He made the remarks during debate on whether the Coast should have a judicial inquiry into the Council which had been put under administration and the Councillors suspended.

But the Ourimbah Masterplan he praised now appears to have completely ignored the Councillor input.

The Councillors, who were suspended in October 2020, unanimously agreed in April 2020 that any plan for Ourimbah would classify Ourimbah as a ‘Village” rather than a town centre.

That classification changes the way development is viewed.

The Councillors stipulated that building heights be limited to two storeys except on the Pacific Highway between Station St and Walmsley Rd where it would remain single-storey to preserve the heritage streetscape.

At the time, a CEO response contained in the council papers said the motion was unnecessary and included a two-page explanation as to why.

Part of that explanation said that a Development Control Plan (as opposed to this masterplan) would provide details of public domain improvements, height, built form, car parking, site setbacks, solar access and landscaping.

Nevertheless, the Councillors adopted their motion under the exception method, meaning it was passed with a number of other items at one time.

Its description of the background jumps from July 2019 to October 2021.

It does not mention that in October, 2019, residents addressed Council and called out the plan, saying it was a travesty and did not address flood and bushfire diagrams which showed there was very little land that could be developed.

The Councillors agreed and deferred the masterplan, awaiting further studies.

In February of 2020, residents met with Councillors and staff and handed over 20 items they wanted included in the plan.

Ourimbah Region Residents’ Association (ORRA) said text references to heights that were in the earlier versions have been removed.

Most of the images of four and eight storey buildings have also been removed but ORRA said that without specific references to heights the plan is meaningless and open to legal interpretation.

“The image showing three and four storeys implies that these would be permissible and so set the future character of the area as being up to four storeys,” ORRA said.

Davies said the plan wasn’t rewritten to airbrush the Councillor resolution, it just seems to have ignored it and avoids mentioning heights.

“In addition to the image of 3 and 4 storey buildings, there is a statement on page 60 that makes clear that the plan intends to go beyond the existing planning controls and the motion passed by the Councillors.

“It states ‘New buildings are moderately-scaled, with opportunities for landmark buildings in prominent sites to reach greater heights’.’’

The Chronicle will report on the decision at the next available print edition and online.