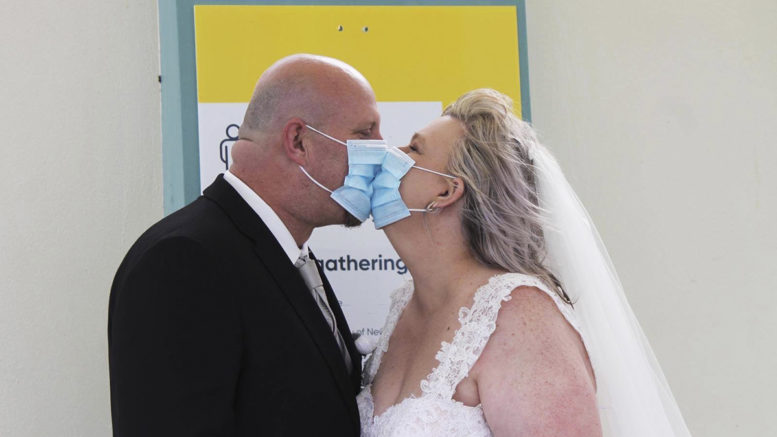 Neil and Deborah Piddington doing the ‘COVID Kiss’ at their wedding. Archive June 2020.

As COIVD-19 cases continue to escalate so does the wait for PRC tests on the Central Coast where residents have been lining up from earlier than 5am to be certain they will have access to a test at a drive-through pathology location.

CCN has been receiving reports since December 26 of queues at drive-through clinics at Woy Woy, West Gosford and Kanwal as well as queues outside Wyong and Gosford Hospitals that go on for kilometres resulting in some people waiting for four, five hours and beyond to be tested.

Those who decide not to wait have then found it difficult, if not impossible, to buy a rapid antigen test kit – one woman said she paid $60 for a pack of five RATs.

Premier Dominic Perrottet and Parliamentary Secretary for the Central Coast, Adam Crouch, have both apologised for the long testing queues..

and Member for Gosford, Liesl Tesch, has written to Perrottet asking for him to address the problem of long queues for testing, long wait time for test results and no supply of Rapid Antigen Test kits.

In an emergency national cabinet meeting today, leaders agreed to a new national definition of a “close contact” as someone who “is a household contact of a confirmed case – so from midnight tonight you will only be considered a close contact if you have spent more than four hours with or live with a confirmed case.”

Isolation times have also been cut for confirmed cases from 10 to seven days from the date of their positive test.

The positive case, according to PM Scott Morison would need to have a negative result from a Rapid Antigen Test taken on day six to leave isolation on day seven.

However, CCN is aware that, at least in young and healthy positive cases of COVID, the patient is often cleared by text message from NSW Health with no negative test result required – in fact, no additional testing required after the first positive test.

This is due to antibodies potentially showing up in test results for months once someone has contracted the virus, even though they may not be infectious after a week.

Morison said a close contact with symptoms will need to have a PCR test.

Close contacts will also only be required to isolate for seven days.

If they don’t have symptoms they will need a negative rapid antigen test before leaving quarantine.

The new measures are intended to alleviate pressure on test clinics, who have, in the previous Delta outbreak managed quite well with similar levels of demand for testing.

It appears Federal and State Governments are taking a punt on most new cases being the Omicron variant – even though the type of COVID-19 contracted by patients is not revealed to those patients when they are tested.

2 Comments on "New ‘close contact’ definition comes in to force"