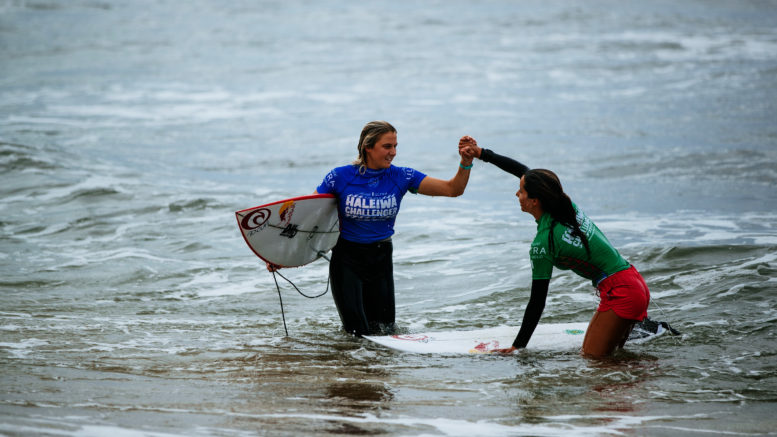 The 2021 Challenger Series has reached a conclusion in Hawaii without Championship Tour (CT) qualification for Avoca Beach’s Macy Callaghan and Wade Carmichael, nor for Shelly Beach’s Molly Picklum.

With Carmichael eliminated in his opening men’s Round of 64 heat on Day One, it wasn’t until December 5 that Callaghan and Picklum entered the waves for the women’s Round of 32.

At the back end of a fierce and unpredictable swell that challenged the male finalists earlier in the day, reaching up to 10 feet in size, both surfers impressed by winning their respective heats.

In Heat Five, Picklum showed her potential on her very first wave only three minutes in, securing a Round of 32 second highest score of 8.33.

Beginning with a graceful frontside snap, her second turn traced the wave’s lip with control as it crashed down white water all around her, and a first pump to the cheering crowd revealed her exuberance in landing as neatly as she did.

For Callaghan, a calm start spent searching for the right wave ended with three seven-point range scores secured on the forehand to first find the lead and then extend it for a two-wave score of 14.50.

This was as far as Macy would advance at both Haleiwa and in the Series due to her elimination in the following day’s Quarter Final, with Sakura Johnson and American Lakey Peterson advancing ahead.

In the previous Quarter Final Picklum managed to find two late five point plus scores in a row to finish first and advance into a hotly-contested Semi against Sakura Johnson and Peterson, as well as Victorian surfer, India Robinson.

Third place would have earned Picklum enough points in the overall Series tally to qualify for the CT, but a stagger at the final line brought her season to a close.

Although holding the lead into final 10 minutes, she was then pushed down to the bottom by the impressive performances of her fellows.

With the wave priority in the final minute, Picklum required a 5.87 to push back up into second place and qualify for the Grand Final or 4.90 to finish in third.

Her final attempt began with 30 seconds on the clock but was foiled by her overpowered first snap that saw her fall off her board.

As a result, Molly finished eighth overall in the Series with only the top seven advancing through to the CT, missing out behind Hawaiian Luana Silva on a tie-breaker decided by the best two out of four event results.

Not far behind in 15th place finished Callaghan, with Carmichael placing 80th in the men’s division.

This has made for a disappointing end to the Series for the three Central Coast surfers, felt most poignantly by Picklum at the very edge of CT qualification.

With the level of international competition in the World Surf League at its all-time highest, these three have nothing to be ashamed of and they will surely seek more chances in future seasons at reaching the uppermost echelon in professional surfing.