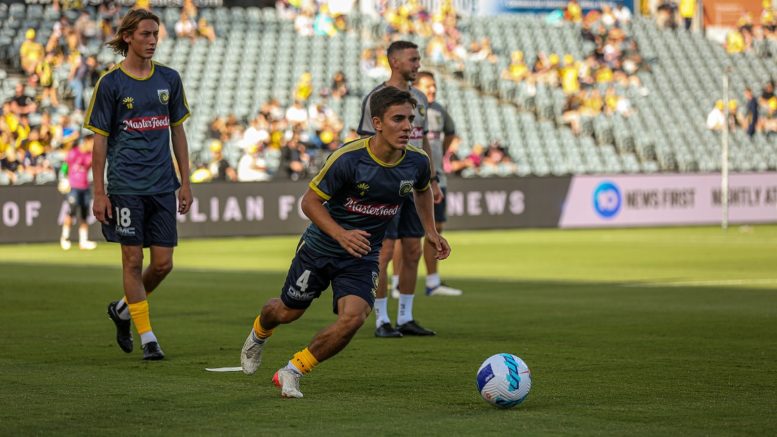 It was an exceptional return to football at Central Coast Stadium for the Mariners, defeating rivals Sydney FC, 2-0, on Sunday for the first home game win of the new season.

Upon securing two unanswered goals prior to the 20th minute mark, and before so much as a single Sydney shot at goal, the boys in yellow had every opportunity to carry on with more goals if every boot on the field had been shooting straight.

Cy Goddard was once again hard to handle on the left wing, but is still denied an opening Mariners goal despite coming closest with a dangerous out of the box shot on target in the seventh minute.

In midfield, new academy product Harry Steele once again partnered with captain Oliver Bozanic, together orchestrating most of the first half’s play to ensure the team stability through high possession in attack and high pressure in defence.

The latter of these tactics led to the opening goal in the 13th minute, afforded due to Bozanic’s alert slide tackle on Harry Van der Saag, giving to the South American attacking duo the disrupted defensive line needed to carve the route on goal.

Once recovering the loose ball, Matheus Moresche supplied the final pass into the penalty area, leaving Ureña unmarked against Sydney keeper, Andrew Redmayne, for a clinical and well-earned finish.
Three minutes later, the Mariners momentum reaped its second reward, marked as an own goal for Sydney’s Anthony Caceres.

This time it was Academy product, Jacob Farrell who executed the slide tackle steal against Van der Saag, allowing Moresche the time to take possession and work a cross-field pass to the forward surging Lewis Miller on the right.

After successfully gliding past Sydney defender, Joel King, the low cross from Miller raced back toward the ready boot of Moresche, now lined up right in front of goal, forcing the desperate intercept from Caceres that ended with the ball in his own net.

With a two goal deficit and 70 minutes of regular time still to play, Sydney FC were left counting on a drop in Mariner concentration levels to help them back into the game, just as what happened in these teams’ previous A-League encounter at Central Cost Stadium in April.

However, Head Coach, Nick Montgomery’s new squad showed the resilience against the rising Sydney attack to keep the southern travellers at bay, record their first clean sheet this season and defeat the boys in blue at home for the first time in four years.

“I’m super proud of the young boys but they’ve still got a lot to learn and a lot of improvement to go,” reported Monty at the post-game press conference.

“We’ve started every game this season on the front foot quite quickly… I think what was different (today) is we were a bit more clinical.

“Every training session, every game, they’re learning, and you only learn by experience so sometimes you have to just throw them in and they’ll sink or swim.

“Morseche, the Brazilian boy: I think he’s got bags of ability, and (with) Marcos Ureña they’re creating a good partnership.”

Ureña agrees that his partnership with Moresche has great potential, in lieu of Matt Simon and new signing, Nicolai Müller, both reported to be at the back end of their recovery from pre-season injuries.

“We Latinos always understand each other outside and inside the field, and it’s very important to get these partners in the field,” Ureña said at the game’s conclusion.

“In the last couple of games we created a lot of chances but we now see that we can score.
“The chances are there so we knew it was just about timing, and we’re happy that finally we get back home and we can give this for our families and fans who really deserve it.

“This club is special you know, this is the reason why I want to be here longer, and today is a special day.”

With newfound confidence in themselves, the Mariners have a week to prepare for their Match Week Five encounter against the Western Sydney Wanderers, to be played again at Central Coast Stadium on Saturday, December 18.

This will precede their FFA Cup Quarter Final clash against the Leichhardt Tigers, scheduled to be played at Leichhardt Oval on Tuesday, December 21.