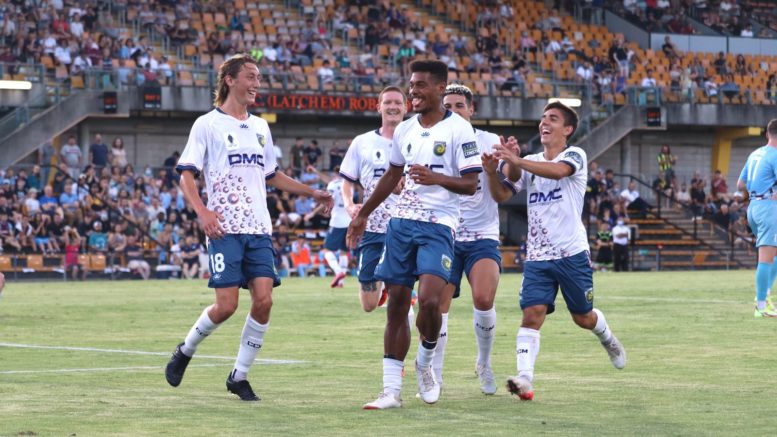 In the week leading up to Christmas, the Mariners have gifted the Central Coast two wins in two games and eight unanswered goals, first defeating Western Sydney Wanderers in the A-League on Saturday and then the Leichhardt Tigers in the FFA Cup Quarter Final on Tuesday.

Satisfaction will be had for Head Coach, Nick Montgomery in knowing that five of the goal scorers are players that he has brought into the first team this year: two of which are international signings and two more being Academy products.

The team began the week with a 2-0 victory on Saturday, December 18, to find footing in the A-League top four.

It was an afternoon of milestones for the boys substituting yellow for white in the intense Christmas heat – holding its radiance for a 30 degree plus evening through to sundown.

Debuts were had for new signing, Nicolai Müller, back from injury to play against his former club, forAcademy product, Manyluak Aguek, as well as a return from a minor injury for Beni N’Kololo to play his first game in Gosford.

Both scorers, Cy Goddard and Oliver Bozanic mark their first this season: the former opening his account for the Mariners, the latter celebrating his 100th appearance for his team with a long searched for free-kick goal.

The first goal in the 59th minute was another example of successful team passing play and composure in possession as the ball was moved around confidently by the back five, until the quick feet of Joshua Nisbet struck through the centre of the Wanderer’s defence.

A leading pass down the line found Lewis Miller on the edge of the box who, repeating his low cross assist from the previous week, this time thread the ball through to Goddard advancing unchecked at the far post.

A first time boot from the international import thud the ball hard against the crossbar before raining down deep into the net, giving no chance to Wanderer’s keeper, Tomás Mejías Osorio.

With the lead established, Head Coach Nick Montgomery could be patient in beginning his player substitutions, yet soon brought onto the field an eager Müller in attack.

The ex-Wanderer found no love from his former teammates who raised their physicality to chase the game, leading to multiple fouls conceded in the final third of play.

Deep into injury time, an illegal tackle against Nisbet set up Bozanic to once more try his luck from the free-kick, this time wheeling the ball with animosity to see it fly over the defensive wall and well out of Mejías’ reach.

The final whistle followed shortly to secure three points for the Mariners, pushing them up into fourth place with nine points behind Macarthur in first with 13.

With a number of ex-Academy players earning their debuts within the game day squad, it only took eight minutes for Max Balard to find the lead with an accurate, out-swerving ping from beyond the penalty area – a first for the young man in the top squad.

In the 24th minute, the lead doubled with a debut goal for Dan Hall, giving to the Mariners a cushioned half-time lead.

For Kuol, a debut goal was the perfect way to follow in the promising footsteps of his older brother, Alou, an ex-Mariner who continues his inaugural season in Germany with VfB Stuttgart II.

For Hatch, his second Mariners goal rivals his first for sheer brilliance.

Although this time taking more than 25 seconds to score after entering the field, as was the case in his debut game last season in March this year, the distance and acute angle of the strike will naturally lead to it being considered in the running for goal of the season.

To polish off the game, Noah Smith entered his name onto the rising scoresheet to positively mark his first appearance in his new team.

Now, the Mariners face one more challenge to bookend 2021, their Match Week Six contest against Wellington Phoenix to be played at Central Coast Stadium on Monday, December 27.