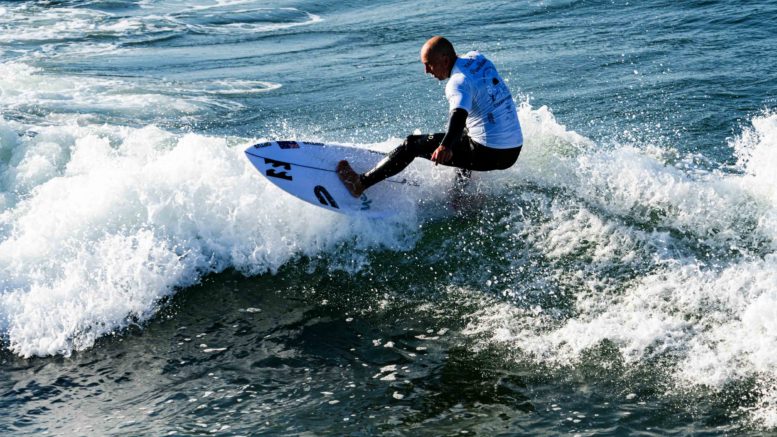 The 2021 ISA World Para Surfing Championship went ahead at Pismo Beach, California from December 6 to 11, with Wamberal’s Matt Formston and Umina’s Jack Jackson both competing with the Australian ‘Irukandjis’ team.

Despite scoring the two best waves all competition in the Men Vision Impaired 2 (VI 2) category, a fourth-place finish was rewarded to Formston after an underwhelming final, with Jackson finishing behind him in fifth.

Overall, the Irukandjis placed sixth out of 24 countries, with victory going the way of the hosting American team, Spain in second, and then Brazil, Costa Rica and Hawaii, then England in seventh.

With the competition centred beneath the long pier of Pismo Beach, the surf remained relatively consistent throughout the week, breaking lightly both ways and beneath four feet for non-challenging conditions.

Two rounds of three-person heats in the VI 2 category took place on Wednesday and Friday last week, with four placements in the Saturday final determined by each competitor’s two best single wave scores across the two heats.

In Round One, Jackson put together his best performance to score his highest two waves for a combined score of 12.94, finishing second behind eventual silver medallist, Miguel Flavio from Brazil.

The goofy footer showed favour for his forehand side, combining manoeuvres with growing confidence, on more than one occasion steering himself delicately beneath the pier.

“I was just getting the left right in there, you know, milking it all the way in until I couldn’t anymore, threading the needle through the pier,” explained Jackson to commentator, Ben Wei, filling the Californian up with a healthy portion of Aussie lingo.

“Then that rip between the pier helps a lot getting out, makes the paddle quick with no duck diving, it’s pretty good aye?”

Formston competed in the following heat, scoring his second-best wave of the competition on his forehand, finding smooth curving lines along two turns for a score of 8.83.

At the end of the day, both Aussies were in the top four out of nine, hoping to maintain their positioning with another strong performance in Round Two.

On Friday, Formston and Jackson competed against each other, wherein the former prevailed with a new high score and the latter underperformed to fall out of the top four.

Although awarded a score of 9.00, Formston’s second wave of the heat could have been a perfect 10.00 if it has not been for a final slip atop the wave’s crest.

Again on his forehand, Formston rode the wave from trough to lip for three turns, ending with an unbalancing floater manoeuvre that tipped him off into the white water – nonetheless securing him the topmost two wave score of 17.83 across the two rounds.

In the following day’s final, this great form seemed to be lacking in Formston’s performance, where upon falling behind in the score early caused him to stay behind in fourth place.

Costa Rican, Roy Calderon came away with the win, with Flavio in second and Hawaiian, Aaron Paulk in third.

Throughout the finals day, five other Australians competed for a shot at gold, each of which ended up making it onto the podium.

Jocelyn Neumuller finished first in the Women Prone 2 final, with Samantha Bloom behind her in third.

A fourth-place copper medal will have to suffice for three-time World Para Surf Champion, Matt Formston.

At only 19, Jack Jackson will take a lot away from his opening bout in global competitive para surfing and will surely work to return to the Championship next year.

In the meantime, the veteran-apprentice pair can focus their attention onto a documentary film project which takes vision impaired big wave surfing as its central focus.

With the conclusion of Pismo Beach, the two Coasties have their intentions set on hunting big waves in Fiji and Indonesia – “charging big waves on coral” as Matt puts it.

The film, titled ‘The Blind Sea’ is being made by Australian filmmaking collective, Brick Studios and will be in production around the world over the next 12 months.

2 Comments on "Fourth for Formston at Pismo"