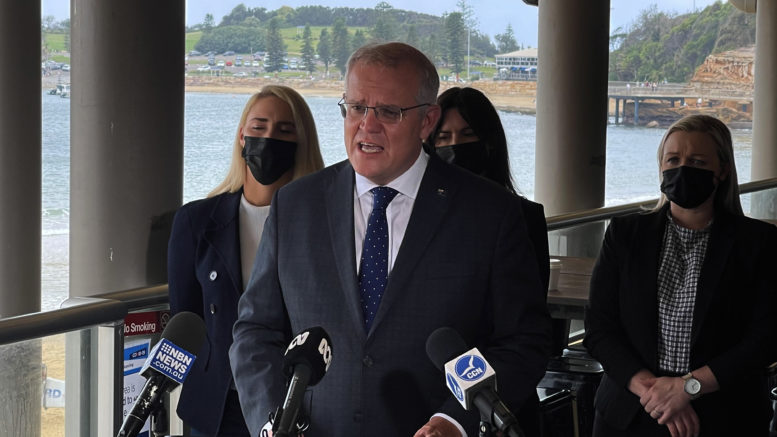 The Federal Government announced last week it had taken the first steps towards cancelling the PEP-11 permit for off-shore gas exploration over an area stretching from Newcastle to Wollongong, with waters off the north of the Central Coast a likely drill site.

The permit expired last February (2021), with an application for renewal hanging in the balance for 10 months as environmental groups and residents waited for Federal Resources Minister, Keith Pitt, to sign off on a refusal.

But with permit holder Asset Energy (a subsidiary of Advent Energy) not having yet received notification as we went to press and foreshadowing a “consultation and assessment process that could take several months”, doubts are emerging that a final resolution will be reached before the next Federal election, which will take place by May 2022.

Morrison said last week that while gas was an important part of Australia’s current and future energy mix, PEP-11 was not the right project for the “pristine beaches and waters” off the east coast of NSW.

He said the major reasons for refusal were high levels of community opposition and the fact the Government is not satisfied that the applicant is able to raise sufficient funding to progress the work.

NOPTA, as the regulator, will grant the applicant 30 days to respond to the notice of intention to refuse the application.

Asset Energy Executive Director, David Breeze, said last week’s announcement ignored science and the need for gas and the company looked forward to working with NOPTA and the Government over an “assessment process” he said could take “several months”.

“Our focus will be on addressing concerns and letting people know about the positive environmental and economic benefits which would come from our proposal,” Breeze said.

“Asset Energy has at all times followed correct procedures and due process in seeking to retain our rights to explore much-needed gas resources offshore NSW.

“Asset has the technical expertise and has demonstrated the financial capacity to complete the proposed exploration program in a timely and safe manner.

“I hope that throughout this process, the country’s commitment to independent, science-based regulation of energy resources will prevail, not any short-term or political decision-making.”

He said the proposed exploration zone was more than 20km from the coast with estimates indicating there was enough gas there to provide energy to NSW for more than 20 years.

He said while drilling for gas, Asset Energy also intends to explore the potential for Carbon Capture and Storage (CCS) in an area about 100km from some of Australia’s largest CO2 emitters.

He acknowledged that many in the community have genuine questions about the activity and said the company will respond in a forthright and truthful manner.

“But it is important that we have a public discussion which is grounded in fact,” he said.

He said many business organisations, community leaders and political representatives support the “need to capture the economic, energy and environmental benefits of the activity we propose”.

The announcement has been met with cynicism from Labor MPs in the north of the Coast.

Member for Dobell, Emma McBride, said it was not “an official end to PEP11”.

“Our community has been calling for an end to PEP11 for years,” she said.

“Now, on the eve of an election and 10 months after the original deadline, we learn the Government has an ‘intention’ to stop PEP-11.

“But the Government has made promises like this before and failed to follow through so how can our community trust this announcement?”

Member for Shortland, Pat Conroy, said the announcement was “more than 300 days overdue” and could have been made quickly in February with a stroke of a pen by Minister Pitt.

“Extending PEP-11 has never made sense from an economic, environmental or energy perspective,” he said.

“It would have put at risk thousands of local jobs in tourism, hospitality, and recreational and commercial fishing.”

He said the Government had left the Coast community “in limbo” and ignored its wishes for almost 12 months.

“This is a huge win for local residents – and they deserve to be congratulated and recognised for their advocacy” he said.

Save Our Coast, which has been agitating for several years for the cancellation of the permit, said the announcement was not a “final result”.

SOC Director, Peter Morris, said an official notification of formal refusal would be “a fantastic outcome” for coastal communities, the environment and marine industries including tourism and fishing.

“The good news is that the Federal Government has written to NOPTA and to the NSW Government saying that it intends to refuse the application to renew the permit,” he said.

“The first reason it cited was the high level of community opposition.

“Save Our Coast eagerly awaits confirmation from NOPTA that the renewal application by Advent Energy has been formally refused.”