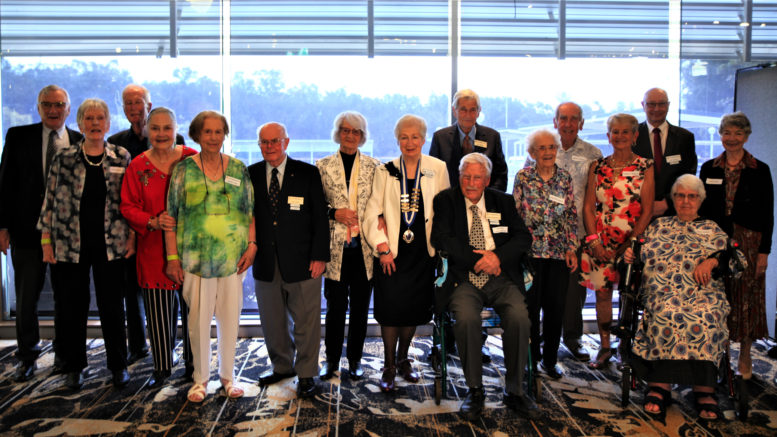 East Gosford Probus Club celebrated its 40th birthday on December 9 with a luncheon for members at the Breakers, Wamberal.

Since then the club has grown to include 39 members, expanding to include women in 2013, and meets on the first Thursday of each month.

“We were truly locked down for many months, as we meet in Waterford Retirement Village large hall, so unfortunately we could not gather,” Bowers said.

“The committee met in the early months as often as possible, using Zoom meetings.

“We shared names of members and rang them frequently to chat.

“On a couple of occasions we sent flowers to all those people who do not have email as a contact, and much delight was evident with that gesture.

“The email was useful for sending short, interesting videos out to members, some about the NSW Art Gallery, some really amusing ones, and some very, very, funny ones.

“We had set out activities for the year, so it was quite sad that many of these were cancelled.

“However, in between lockdowns we managed to have a trip on the Riverboat Postman, a look at the Broken Bay Pearl Farm and a visit to the Distillery Botanica.

“We also went to Gartelman’s winery on a day trip and lunched at the Elanora; so not all was lost.

“We currently have 39 members but would love to have some more to join us in fun fellowship and friendship.

“Hopefully our trips in 2022 will be easier to plan, including the Mayfield Gardens at Oberon that we missed last year.”

Bowers said the anniversary luncheon was a great success, with special guests including Member for Terrigal Adam Crouch, and Suzanne Evans, a Past President of East Gosford Rotary (representing President Kim Wells), under whose umbrella the Probus Club began.

A letter of congratulations was received from Probus South Pacific.

“Ellen Verrier, one of our honoured guests (now aged 98) who is still spritely, flew up from Melbourne to join us in our celebrations and deliver a very happy talk to 42 people present at the Breakers.”