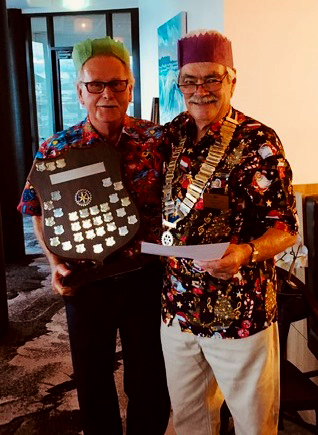 The Rotary Club of Umina Beach has recognised two of its members for their service in the community at their Christmas Party this month at the Boathouse Hotel Patonga.

The club awarded a Paul Harris Fellowship to club member Mike Dwyer for his continued role as Rotary Foundation Chair within the club promoting support for Rotary projects at home and abroad.

Along with his wife, Colleen, he also manages the club’s involvement in the Rotary BowelCare program involving distributing kits to participating pharmacies and collecting monies for return to Rotary, and in visiting the club’s roadside collection teams during the annual Salvation Red Shield Appeal supplying refreshments and collecting donations received.

The club congratulated Mike on earning this award and thanked him for his outstanding community service.

The club also awarded the annual Rotarian of the Year Trophy to long time member and past President Wayne Dowdle.

Wayne was for many years one of the principals of Clark Dowdle Surveyors in Umina, he is currently Vice Chair of Peninsula Chamber of Commerce and a director of Peninsula Village Aged Care.

During the year he has excelled in initiating three projects for the club.

Along with the Rotary Club of Woy Woy, Dowdle managed the club’s part in the donation of music headphones for residents of Peninsula Villages so residents could enjoy music quietly during times of relaxation.

He also co-ordinated the club’s participation, with the Rotary Clubs of Woy Woy and Brisbane Water, in a joint donation of $1000 to BlueWave Living.

“We are very fortunate that Wayne will be our next club President for the 22-23 Rotary Year and the club thanks Wayne for his outstanding service,” Publicity officer, Pat Lewis, said.

“His largest project was brokering the donation by Peninsula Villages of 70 surplus hospital beds to Rotary and the co-ordination of club members to transport these to Sydney to be sent to Beirut and Sri Lanka as a humanitarian donation.”