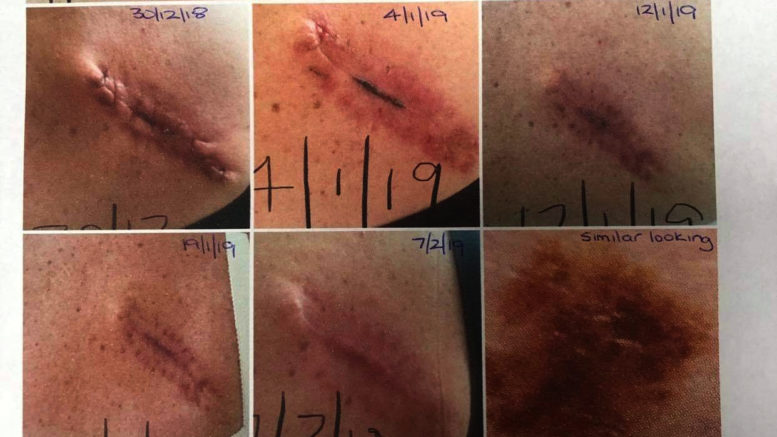 A Woy Woy resident is encouraging locals to check their skin for unusual spots or moles in a bid to detect skin cancer early.

In 2018, Kathy Martin’s husband noticed an unusual mole on her back and so she soon booked an appointment with her doctor.

It was then that she was diagnosed with high stage 3 low grade 4 melanoma.

“I used to have my skin check-ups regularly but at that time I hadn’t had one in about 13 months,” Martin said.

“Although it was there, I had been checked up. It only happened in that short space of time between appointments.

“I was getting changed and had a strapless bra on and my husband saw something under my bra.

“I went to the doctors, and they took a biopsy.

“Two days later the biopsy results came back … he told me to get to surgery now and get it taken out.

“I was in a state of shock – there was no waiting around.

“I was fortunate because I didn’t have any chemotherapy … they got it all.

“They cut wide and deep, right down to the muscle in my back.

“I prefer the hollow I have in my back rather than going through all the dramas.

“I was told it was very serious, life threatening. I was very lucky.”

She was cleared of all cancer afterwards.

Martin said she is now ‘religious’ with her skin check-ups and encouraged others to do the same.

“I’m much more aware now when I’m out in the sun … I walk around with 50 plus sunscreen on, I add it to my moisturiser,” she said.

“I stayed away from the sun afterwards, I was paranoid and so my Vitamin D levels dropped.

“I was a sun worshipper all my life – I stopped 20 years ago and now I’m pretty good with it.

“I still get a niggle in my back now as they had to cut down to muscle.

“Just go and get it checked – you can even go to a chemist and get it done.

“It’s better to get it early and have that little thing cut out of your body instead of it then hitting other parts.

“You had to be wise, be careful.

“You can still get a nice, glowing tan with your 50 plus protection on, you just don’t end up burning.

“It can happen to anyone.

“If you get checked every 12 months, and they find something, at least you know its new and there’s a time frame and it’s been caught early.”

The report also indicated almost half of people (49 per cent) living in NSW believe that where they live makes them more susceptible to skin cancer.

Thirty per cent of people also said the pandemic had prevented them from getting a skin check this year.

The full research report can be found at: tal.com.au/about-us/our-commitments/our-customers/health/tal-spotchecker/skin-safety-report