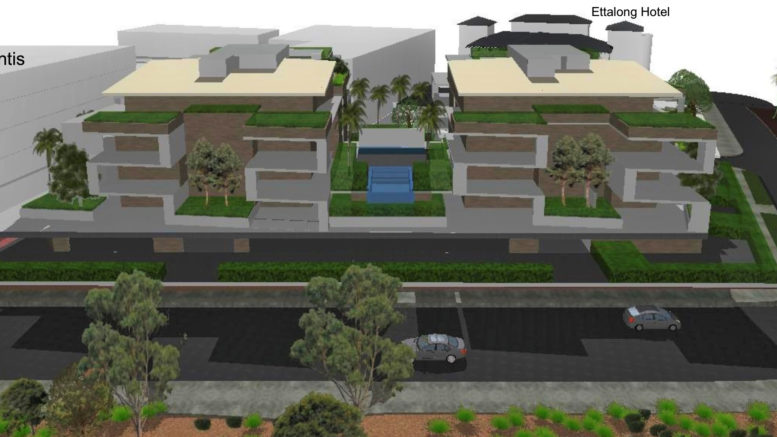 Architect’s design of the development

The Residents for Responsible Ettalong Development (RRED) group have ‘strenuously objected’ to a planning proposal that would allow a five-storey development at 43-46 The Esplanade, Ettalong Beach but the Peninsula Business Chamber supports the proposal.

RRED spokesperson, Peter Gillis, said Council’s 83-page document indicates their Planning Department does support the development, and that Council has been in discussion with the developer since at least August 2020.

He also said Council’s Local Planning Panel approved of the rezoning at a June 10 meeting in an agenda item which was not disclosed to the public.

“The long Council engagement with the developer, the plans which were withheld from the public, the undeclared meeting of the Council with the LPP, and the submission of a re‐zoning proposal which is in fact a major development proposal, all lead to the conclusion that the community is completely cut off from important decisions that have huge impacts on our amenity and lifestyle.

“Despite objections to Council, a petition which now has over 1,700 signatures, emails and discussions with local members, and emails to the DPIE, there is still no response to our community’s objections to this assault on our environment.”

Under the proposal, the development could achieve five storeys in height involving up to 38 residential units and a commercial floor space of 1,100 square metre gross floor area.

“If the Gateway proposal is approved by the DPIE, the developer will submit a DA,” Gillis said.

“The proposed building cost will be over the threshold amount that the Council and LPP are allowed to consider.

“That means the public will have extremely limited opportunity to object to this foreshore development, as happened with Atlantis, and the Centrelink 52-unit block under development one block away.”

The group said they have submitted a 1,500 signature petition against the proposal to Planning Minister, Rob Stokes, and other local members but have had no response.

The Peninsula Chamber of Commerce has placed its support behind the proposed rezoning of The Esplanade properties.

“The Chamber has welcomed the rezoning application and the support of both Central Coast Council and the NSW Department of Planning,” Peninsula Chamber Vice-President, Wayne Dowdle, said.

“These properties have been sadly neglected over the last 20 years and represent some of the best beach front commercial land on the Central Coast.

“It’s great to see a well-constructed planning proposal that will see a modest five-storey mixed use building that incorporates basement level parking, ground level retail space and four levels of high-quality residential apartments that will greatly enhance to the beachfront precinct and provide major investment and jobs boost to the area.

“Contrary to what has been said by those that oppose the development, it is not [a] high rise.

“The proposal is consistent with the existing height limits of five-storeys in the rest of the Ettalong Beach town centre and considerably lower than the existing Atlantis Apartments and the Mantra Resort.

“This rezoning and other Ettalong Beach developments that have recently been approved are an encouraging sign that the hard work by the business community is paying off.”

Plans and documents of this proposal can be viewed at bit.do/Ettalongforeshore.