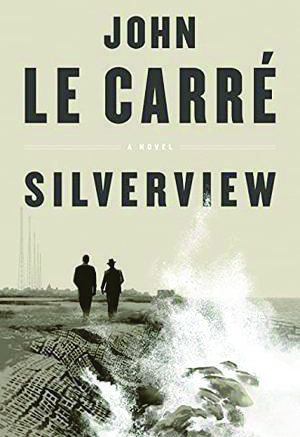 Published posthumously, this is the 26th novel from John le Carre, a former British Intelligence officer who became a world renowned author.

Silverview begins on a rainy (what else) morning in London where Lily, with her two-year-old son in tow is delivering a secret message to Proctor.

When a woman answers the bell Lily says, “I need Proctor. She said Proctor or no one.”

So Stewart Proctor, urged by Lily’s mother to be there to meet Lily reads the secret letter and tells Lily the answer is “yes”.

The story then travels to the small town of East Anglia.

It is there where we meet Julian Lawndsley.

He is in his early thirties and has just purchased a bookstore.

He comes from London and seems to be cashed up but has had enough of the city.

Which is good because he will not get the city hustle and bustle in East Anglia.

Just as Julian is getting ready to shut the shop for the night in walks a figure in “Homburg hat and fawn raincoat, armed with a furled umbrella.”

After perusing the store, the figure introduces himself as Edward Avon and makes a suggestion to Julian that his store is incomplete without Sebald’s, Ring of Saturn, (I looked it up, it is an actual book about East Anglia, which I won’t be reviewing).

When asked what Edward does he replies, “Let us say I am a British mongrel, retired, a former academic of no merit and one of life’s odd-job men. Will that do you?”

But that really isn’t the truth, is it?

The next morning the two coincidentally end up at the same cafe, when Edward tells Julian of another coincidence, that fact that Edward knew Julian’s father.

The two went to school together.

Edward does seem to know details that only a school friend would know.

Maybe it did happen. Maybe not.

Edward even professes to assisting Julian’s father financially when he fell into difficult times as a disgraced vicar.

Maybe he did help out.

Does Julian crave a father figure?

What is in it for Edward?

We then have two stories running side by side; one of Proctor, his marriage, his quest to uncover a leak, and the other story of Julian and Edward.

Edward’s dying wife and daughter and his house, Silverview, “big dark house on the other side of town, darling. Halfway down the hill from the water tower, lovely garden, or was.”

Eventually the two stories will meet up.

I am not going to pretend to understand everything that went on in this story.

What I don’t have to pretend to get is the dialogue – it is witty and tight.

Julian and Edward have great conversations: “Will you permit me, Julian to say something personal and potentially offensive? As long as it’s not too personal, Julian replies warily, but in a similarly light vein.”

It is a quick read and overall a pretty good one – a good one for the Christmas Stocking!