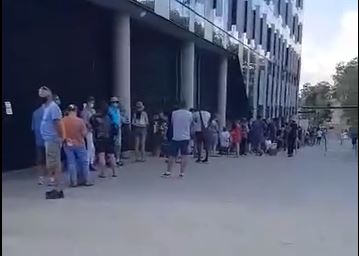 A line hundreds of metres long has formed outside the Gosford testing clinic. Dec, 2021

Being a close household contact of someone with COVID-19 over Christmas has come with many challenges but I didn’t think the biggest would be getting tested.

My daughter started to feel unwell on December 19 so she had a test and on December 20 her COVID-positive status was confirmed.

It was scary – she was initially very unwell with an extremely high fever and a cough that was difficult to listen to.

She is improving but it is up and down and my motherly fears that long COVID might impact my beautiful, vivacious, sporty, happy daughter keeps me awake at night.

I was tested on December 21 and found out late on December 24 that we were negative – so far so good – but two more tests to go on days six and 12 before I’m out of the woods and Dr Google says 25 per cent of close exposures don’t show symptoms until between days seven and 14.

We managed Christmas day as best we could and our house continues to be divided into red and green zones as we do our best to contain the virus.

I left home at 9am expecting it to take at least two hours to get through the COVID drive through clinic run by private pathology company Douglas Hanly Moir Barratt at Adcock Park, West Gosford, which was where we went for our first tests.

I’d checked opening hours to make sure it was operating on Boxing Day but as I approached the corner of Central Coast Highway and Racecourse Rd a sign said test clinic closed and witches’ hats blocked the righthand turning lane.

I activated plan B, drove directly to Gosford Hospital’s Holden St clinic, found a car park and walked up the hill where I was confronted by a queue that weaved up past the new building all the way to the emergency entry road and along the top road.

I mentioned I was a close household contact of a confirmed case and she shrugged her shoulders, told me most people in the line were close contacts and I should line up, keep my mask on and socially distance along with everyone else.

Some people did not have masks on and there were children and elderly people waiting – some came prepared with umbrellas, chairs, coolers and books to read – it was astonishing.

I decided not to wait – to just drive home and get up very early on December 27 to make sure I was at the front of the queue – it would add at least a day to our quarantine but that felt like a more sensible option than standing in the sun along with hundreds of potential COVID cases.

I asked how long people had been waiting and they said they had arrived before 6am – I heard mothers apologizing to their children about how long it was taking – and there was no guarantee everyone who queued would get tested.

As I drove home I noticed there were cars lined up for testing in Adcock Park even though the signs said test clinic closed – after wrangling with the gate keeper I joined the very back of the queue.

I joined the queue bang on 10am and made it to the front of the line bang on midday.

One of the testers told me they were official closed and that they had been shut down by the police at 8:30am.

They appeared to have plenty of test kits, staff, porter loo, shade tent – everything they needed to keep testing until their allocated and advertised close time of 2pm but they were packing up for the day at 12pm.

Glen Smith, Duty Officer, at Gosford Police said information that police had closed down the testing clinic at Adcock Park at 8:30am was incorrect.

He said the police do not close down testing clinics and it would not be in their interests to do so.

“They are not run by us – they are run by Health or the private COVID clinics, he said.

I’ve attempted to call the pathology company’s Chief Branch Operations Office, Kathy Davis, to find out why the clinic had been closed having only conducted around half as many tests than it had capacity to perform by 2pm.

I was placed on hold for 15 minutes and there was no option to leave a voicemail but I will keep trying.

I have also sent an email to the office of Health Minister, Brad Hazzard, asking for confirmation of whether it is the state or federal government responsible for operating the private pathology clinics and deciding when they open and clsoe.

My other questions were about the queue outside Gosford Hospital.

Does the Minister consider a five hour wait time for testing at a regional hospital acceptable?

What measures will the Minister put in place to shorten testing queues and when?

Considering the two testing sites I have seen today have turned away an unknown number of people, it appears current testing clinics are not coping with volume.

How will NSW Health manage what appears to be a testing crisis with queues now becoming exposure sites?

The Minister had not responded as we published this article but we will publish his response as soon as it arrives.

Fortunately we got tested today but even as close household contacts we were told we can expect to wait 72 hours for the result.

Here I sit, four hours after embarking on the simple task of getting a COVID test, safe and cool in the green zone of my house but I feel for every person still sitting in that queue outside the Holden St clinic and for those who have been unable to get a test at all.

I will report the responses I receive from the Minister and the pathology company as soon as they become available – perhaps they are stuck in a queue somewhere.

3 Comments on "A very testing Boxing Day queue in Gosford"