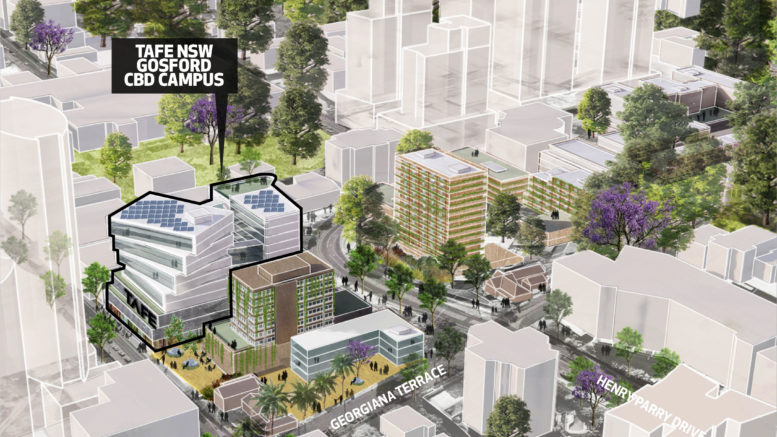 An architectural rendering showing the location of the proposed TAFE

A huge parcel of land in the heart of Gosford, incorporating the Central Coast Council administration building, is likely to be transformed into a new state-of-the-art TAFE campus.

The State Government announced on December 2 that it is in negotiations with Council to buy the administration building and surrounding blocks, including the old Broadwater Hotel site, and land at the rear of both the chambers and the Central Coast Conservatorium.

The project will also encompass the existing TAFE site.

The administration building was earmarked earlier this year to go on the market as one of the Tranche 1 asset sales announced by Council following its financial difficulties and is expected to attract a hefty price.

The figure being negotiated remains confidential but Minister for Skills and Tertiary Education, Geoff Lee, who was on the Coast to make the announcement, said the entire project would cost in excess of $100M.

The project will incorporate a vertical TAFE and substantial residential development.

Lee said there was no exact timeline for completion of the project but work on a business study had already commenced as negotiations on the sale proceed and he hoped construction would begin within 12 months.

“This will be a sensational result for Gosford – but we have to get the planning right,” he said.

Lee said an expanded TAFE presence in the city CBD would likely see an expansion of courses on offer, serving to meet the current and future needs of the region.

Member for Terrigal and Parliamentary Secretary for the Central Coast, Adam Crouch, who initiated the process, said the project was all about continuing to develop Gosford as a major educational precinct and would help kickstart further development.

“Having more courses on offer will help address the skills shortage the region is experiencing and offer more residents an alternative pathway to further education,” he said.

“The proposal will also integrate TAFE NSW with the Central Coast Conservatorium of Music, providing them with a permanent home and secure future.”

Landcom CEO, John Brogden, said the CBD “desperately needs” an upgrade and a revitalised TAFE campus and housing opportunities would be a huge boost.

“We have found that CBD projects such as this require not just offices, but housing,” he said.

“We estimate that up to 10 per cent of this mixed housing will be rental accommodation for students and CBD workers.

“We hope purchasers will be buying residences off the plan within three years.”

Lee said it was not yet known if the present administration building will be refurbished as part of the development or if it will be razed to make way for a new building.

Central Coast Council Administrator, Rik Hart, said it was ironic that such an opportunity had arisen “out of chaos”, with the new development sure to provide massive job opportunities and a link to the nearby waterfront.

Council CEO, David Farmer, said the sale would be a “really good outcome” for the financially strapped Council and create a huge volume of foot traffic through the city centre.

Farmer said he hoped Council and the Government would have a Memorandum of Understanding in place by the end of the year.

“We have always said that selling the Gosford Administration Building would pave the way for an exciting development in that space that could have a significant impact on the shape of Gosford’s CBD,” he said.

“The State Government’s proposal answers the need for urban renewal at that end of Gosford and the educational nature of the proposed precinct complements the recently[1]opened Clinical School at Gosford Hospital and Council’s own Regional Library due to start construction in May 2022.”

Farmer said that, should a sale proceed, it would be a positive outcome benefitting the community and contributing to the revitalisation of Gosford.

He said the sale would provide confidence to lenders that Council operations could continue sustainably, and loans could be serviced.

The project is expected to create 1,000 jobs and up to 3,000 tertiary and vocational education opportunities.