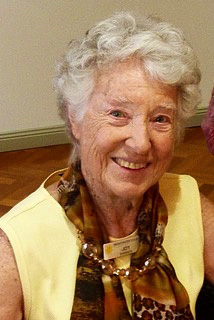 One of the Central Coast’s strongest advocates for legalising voluntary assisted dying has died.

Joy Shannon, former secretary of the Central Coast Group of Dying with Dignity, died at her Kincumber home on October 16, aged 93.

She and her husband of 65 years, Jock, were married in 1956, after meeting in Kampala, Uganda when Joy was travelling around Africa.

They were active campaigners for legal Voluntary Assisted Dying (VAD) for many years, including in New Zealand where they lived for a time before coming to Australia.

She died before seeing that realised in NSW, although it has been adopted in every other Australian state.

Debate on a Voluntary Assisted Dying Bill, moved by Alex Greenwich, Independent MP for Sydney, is due to start in the NSW Lower House on November 12, before being deferred until early 2022.

Its 27 co-sponsors include two Central Coast MPs – Member for Gosford, Liesl Tesch, and Member for The Entrance, David Mehan.

Former coordinator of the Central Coast Dying with Dignity Group, Dr Beverley Symons, said Joy was a lovely warm person and an energetic and committed advocate for VAD.

“She will be greatly missed by Jock, her three children, wider family members and friends,” Symons said.