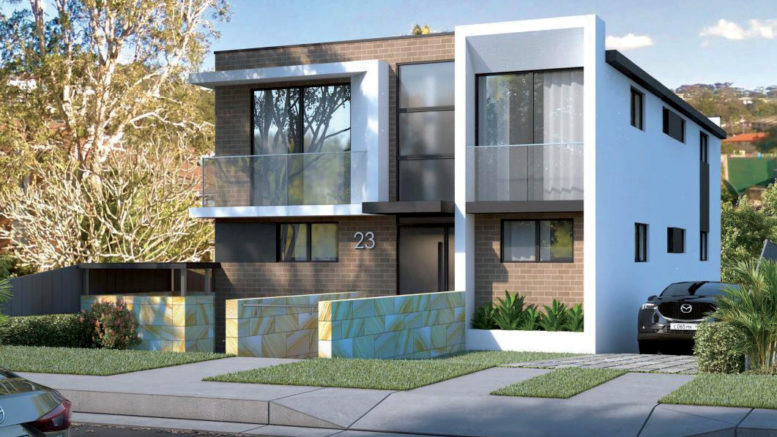 An artist’s impression of the proposed boarding house

More than a dozen submissions of objection have been received to a proposed boarding house at 23 Ash St Terrigal, with traffic, security, and privacy issues highlighted as major concerns.

The proposed boarding house would comprise 10 rooms catering for up to 13 boarders with five carparking spaces, including one disabled, two motorbike spaces and two push-bike spaces to be provided on site.

There would also be a communal room with associated outdoor recreation space.

A Statement of Environmental Effects (SEE) lodged with the application says the original character of modest holiday cottages in the area is changing rapidly, with apartment and townhouse developments springing up nearby.

The SEE says the boarding house is not intended to provide specialist or support housing for persons with a mental illness or physical disability, persons on a very low-income level such as the homeless or particular community groups.

Rather it is intended to provide affordable housing for key workers and low-income earners, front line workers, older people and young workers and students, the SEE says.

But residents have expressed strong concerns about a likely increase in anti-social behaviour, a decrease in privacy – due to overshadowing and increased visibility over neighbouring properties – an increase in noise pollution and an increase in parking and traffic congestion in a street which is already
congested and has limited parking available.

The development could also see a decrease in property values and rental capacity in nearby homes, they say.

Shardai Jimenez‘s family has owned a home near the proposed development site for more than 25 years.

“We ultimately believe that the development does not fit the overall character of the local area,” she said.

“The DA proposes a boarding home, in one of the most expensive suburbs on the Central Coast and where there is limited public transport, employment prospects and social/support services available to those in need.

“There are no provisions stopping the developer from turning this development into a hostel or temporary holiday accommodation upon approval; we saw a similar situation with the DA for a boarding home at Wamberal.

“Our experience with short-term/holiday accommodation in the past is an increase in crime and anti-social behaviour.

“Parking and traffic congestion is already extremely challenging on Ash St for residents.

“We are concerned that if approved, this development will only further complicate the traffic and parking situation.”

Jimenez said allegations that objectors have no care for those in need are baseless and has encouraged residents to review the application in-line with community concerns.

Fellow resident Jan Robinson said the proposal was totally out of character for the area.

“One of the biggest issues is car parking,” she said.

“With 10 rooms proposed to accommodate up to 13 people and only five car spaces provided on site, we are concerned this could lead to five or more cars being parked on the street.

“Parking in Ash St and the surrounding streets is always hard to find, especially at holiday time.

“Another concern is that there is to be no on-site manager, with management only contactable from 9am-5pm on weekdays, so there will be nobody present to enforce house rules.

“We are concerned this could result in noise impacts and loss of privacy.

“Our street already has some development underway and infrastructure is stretched.

“This proposal is for a tiny block of land.

“I am not allowed to build units on my block, which is the same size, because it is deemed too small.”

Submissions close on December 3 on the Central Coast Council website.

State of the art facility for Trojans’ clubhouse

Be the first to comment on "Terrigal residents oppose boarding house"