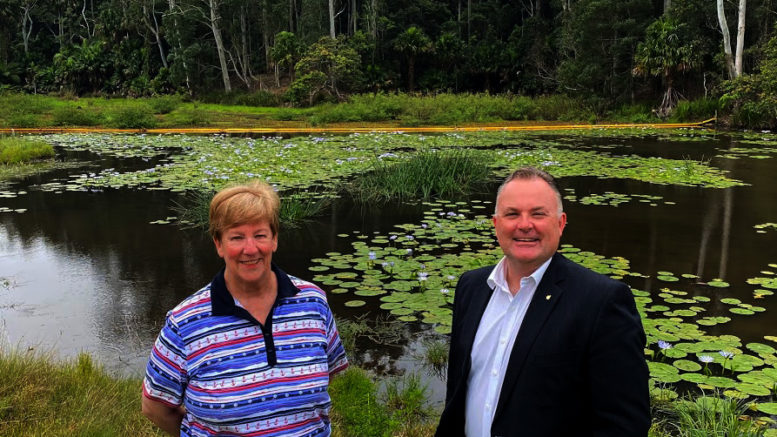 Parliamentary Secretary for the Central Coast, Adam Crouch, with Glenys Ray at the wetland

The State Government will pay for the clearing of a privately-owned section of the Springfield Wetland, which has been a point of community contention for years.

Member for Terrigal and Parliamentary Secretary for the Central Coast, Adam Crouch, said a $125,000 government investment had already gone a long way towards removal of the salvinia molesta and other invasive aquatic weeds on a section of the wetland owned by Central Coast Council.

But there has been an ongoing battle to see the other half of the wetland, which is privately owned, similarly cleared.

Crouch said the remaining $56,000 of the State Government funding would be used to clear the privately owned section.

Followers of Springfield Wetland (FSW) group spokesperson, Glenys Ray, welcomed the move, but is concerned about how ongoing maintenance will be funded once the wetland is cleared.

“My understanding is the landowner has not been co-operative at all in clearing his section of the wetland,”
Ray said.

“It became clear that the only two options going forward were doing nothing, or using the balance of the State Government money to clear the private section, and that is what’s been decided.

“I do have concerns about follow-up maintenance – that is definitely going to be needed to have any chance of getting on top of these weeds completely.

“I am pleased Council is going to undertake the work as I know they will do a good job.

“People who overlook that part of the wetlands will have a nice outlook again and be rid of mossies and there is sure to be a return of a lot more wildlife activity up that end.

“The number of people who have visited this wetland during lockdown further demonstrates the importance of places like this.

“We are all excitedly waiting to see the other half cleared and acknowledge the high level of cooperation between Adam Crouch, Council officers and the community.”

Ray said the wetland was home to nine species of frog, turtles, other reptiles, wallabies, microbats and more than 70 species of native birds.

Crouch said the NSW Government is committed to working with Council to ensure the wetland is restored to its former beauty and health.

“This wetland plays a critical ecological role and provides habitats for native fauna, especially a large variety of birdlife,” he said.

“Wetlands and ponds are a unique part of the Central Coast environment, which is why I am committed to taking action to address the salvinia molesta weed.

“I thank the local residents, including Glenys Ray, for their strong advocacy and for working with me in such a constructive way.”

An application by the owner of the land to subdivide it into four lots was unanimously refused by the Local Planning Panel on June 10.

After considering 61 submissions and a recommendation for refusal from Council, the Panel said the application was not consistent with zoning intent or the character of the site and surrounding area.

“The proposal would adversely impact on the biodiversity of the site as it would facilitate significant vegetation removal associated with future residential development, construction and bushfire asset protection,” the Panel said.