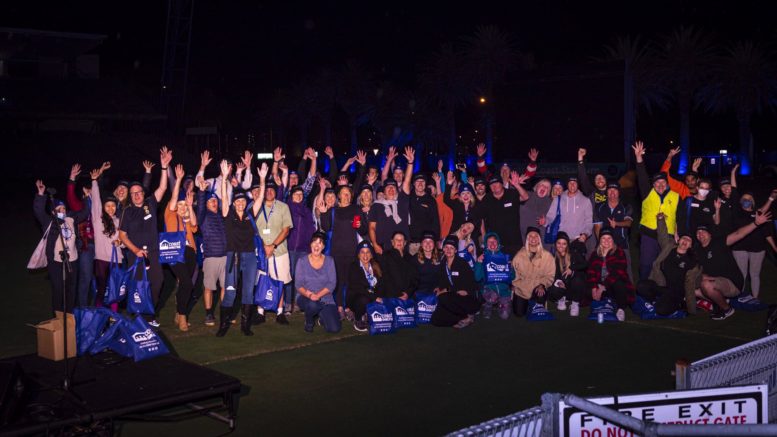 The Central Coast community has raised more than $88,500 through Coast Shelter’s 2021 Sleepout.

After a few false starts due to COVID-19 restrictions, the sleepout was finally held at Central Coast Stadium on November 19, with business leaders from the region braving rainy conditions to sleep rough for one night in support of the homeless.

Two clients spoke of their previous challenges and the difference Coast Shelter’s support had made in turning their lives around, with some of the sleepers also sharing stories of homelessness.

Starr said Coast Shelter has a mission to end homelessness on the Central Coast and would continue to provide care and support for Coasties.

Member for Dobell, Emma McBride, was one of the sleepers and Member for Terrigal, Adam Crouch, sent a message of support.

Each sleeper had to raise minimum $1,000 by selling raffle tickets, running cake stalls and asking friends to sponsor them but the biggest support came from the business community.

The team members from Erina Fair approached their suppliers to sponsor them, bringing in $ 16,927, closely followed by the Eve Security Team, which raised $ 12,265.

“A special thanks to Kwik Kopy and Loyal IT who have supported the Sleepout and attended every year,” a Coat Shelter spokesperson said.

“The Rotary Club of Gosford City loaned us their barbecue and the team from Grill’d Tuggerah donated their time to cook.

“The Coast Shelter Sleepout 2021 was a true community event which coincidentally was held on White Ribbon Day, which highlights the role men have in preventing violence against women.”

Coast shelter is planning an even bigger Sleepout in 2022.

Steele family will take 10,000 steps a week in red socks

Be the first to comment on "Sleepout raises $88K"