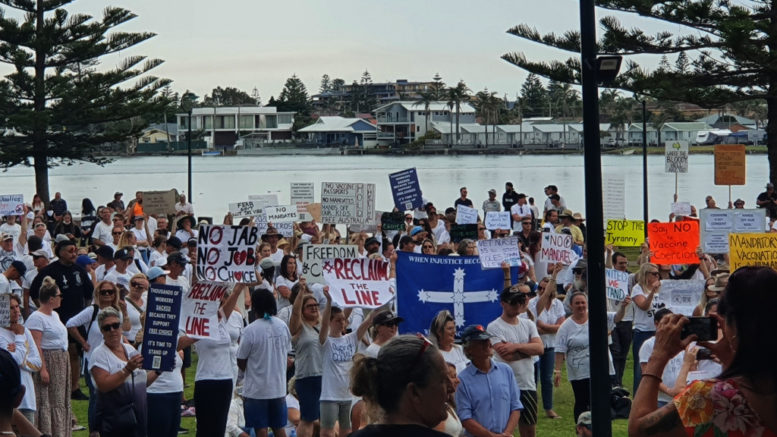 Protesters at The Entrance

[Video report included] Memorial Park at The Entrance was a sea of workers and community supporters who donned white shirts, the symbol of solidarity among those who oppose the State Government vaccination mandate for industry workers.

About 1200 people were at the peaceful rally on Sunday, November 7, with the message My Body My Choice, in opposition to the “no jab, no job” policy.

It was the second #ReclaimTheLine nationwide event which was held simultaneously at dozens of locations across the country.

#ReclaimTheLine spokesman, Christian Marchegiani, from National Education United, said the mandates were profoundly affecting the lives of workers across multiple industries, including teachers whose vaccine deadline on Monday, November 8 followed others already in place.

“It was a peaceful rally for all workers across every industry to stand with their family and friends to show the so-called leaders of this country that we are united, no matter how much they try and divide us.

“Since the first event was held in October, we’ve gained a lot more support from politicians and industry leaders who want to be on the right side of history because they know Australians are suffering as a result of these unlawful mandates,” Marchegiani said.

Marchegiani claims that thousands of workers had resigned since government vaccination mandates were announced, creating chaos across industries.

One of the headline speakers on the day was former police officer, Alex Cooney, who is best known for inspiring the movement, Cops for COVID Truth.

After questioning the enforcement of what he says are “unlawful, unjustifiable and disproportionate” pandemic restrictions, in a letter to the NSW Police Commissioner, he then chose to resign to give police a voice.

“Public trust in the force is now seriously eroded because cops are being used as a tool … to further a broader COVID agenda that’s about control, not health,” Cooney said.

“I know many cops who are frustrated and stressed because they are aware that what they are enforcing is impinging on the rights and freedoms of individuals and the community.

“It’s time to have the courage to speak out or speak up from within by asking questions with integrity and respect.

“The community is waiting for police to stand with them and rebuild the trust that has been broken,” Cooney said.