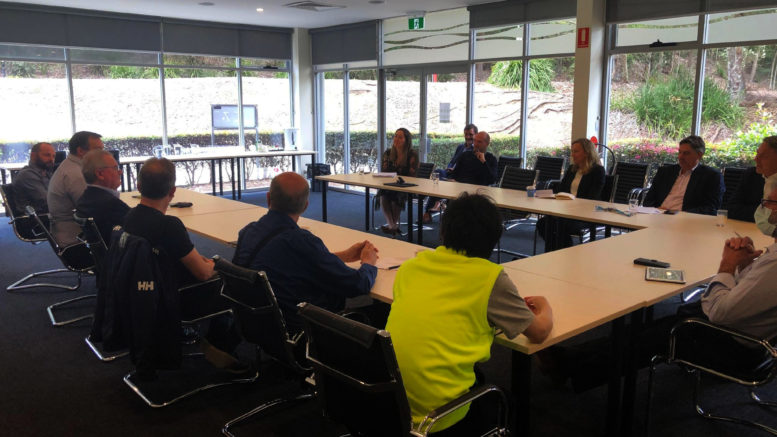 Labor Deputy Leader and Shadow Minister for Skills and Employment, Richard Marles, was on the Central Coast recently to attend a roundtable conference with businesspeople and educators about the shortage of skilled workers.

He and Federal Member for Dobell, Emma McBride, hosted the discussion group at Ourimbah campus of University of Newcastle on Wednesday, November 17.

“Coasties are facing an uphill battle to find work after the pandemic, after eight long years of cuts to vocational training under the Morrison Government,” McBride said.

“On the north end of the Coast, there has been a considerable loss of apprentices and trainees since this government came to power.

“There are 231 fewer apprentices in Dobell right now, than there were eight years ago which is a drop of close to 10 per cent.”

McBride said this decline was being felt in industries that many of us relied on every day.

“Eight years ago, there were 20 apprentice butchers in Dobell but now, under this government, there’s only seven which is a drop of 65 per cent.

“We know that business owners are finding it tough to get staff with the necessary skills.

“In fact, in October more than half of businesses (about 57 per cent) had difficulty finding the right staff.

“In the regions, this number is higher with two out of three businesses struggling to find staff with the right skills and qualifications to fill job gaps.

“This means the Coast needs more skilled workers for the future.

“The Coalition has been in government for close to a decade now and instead of seeing a rise in jobs in Dobell, we’ve seen a drop.

“There are so many young Coasties in our region who should be able to take up a trade through an apprenticeship or a traineeship, but they can’t.

“That’s because this Government has cut more than $3B from vocational education and training, leaving us with a serious skills crisis.”

McBride said that nationwide, the figures were even worse with 85,000 fewer apprentices and trainees in Australia now.

“As a country, we need to have more skilled jobs available and we need to make sure that Coasties have the training to fill these highly-skilled jobs,” she said.

Central Coast Regional Director for Business NSW, Paula Martin, agreed that industry was definitely seeing the effects of labour and skills shortage across the Central Coast.

“We are forecasting that they are here to stay for some time yet as we recover from this year’s lockdown,” she said.

“Businesses are telling me that they are suffering shortages from entry level positions through to more sophisticated high knowledge roles.

“The past two years has seen our traditional industry in food production and advanced manufacturing defy lockdown impacts and continue to grow, creating new job opportunities for young people looking to explore careers in these quickly changing sectors.

“These traditional sectors are high tech, clean and green and are busy solving some of the planet’s biggest emerging problems like reducing waste and production of sustainable foods.

“But we have a lot of work to do to change perceptions of young people to explore VET pathways in these traditional sectors with businesses across the Central Coast reporting finding people with the right skills their number one priority and challenge for 2021.

“The recently established Gosford Industry Training Hub, a Commonwealth initiative delivered by Business NSW is spearheading a new program to bring together regional government agencies and private providers with expertise in skilling our young people across the Central Coast.

“Located in the heart of Gosford, a dedicated Careers Facilitator promotes, educates and encourages students to explore VET pathways in traditional trades.

“They help industry to be more attractive to young students and provide schools with greater knowledge on the changing industry landscape and connections to VET pathways locally.

“The path to a fully open Central Coast economy may take years so focussing now on changing young students’ perceptions of careers in traditional industry by showcasing their evolving sophistication and jobs of the future located right here on the Central Coast will be key to our longer term competitiveness as a region,” Martin said.