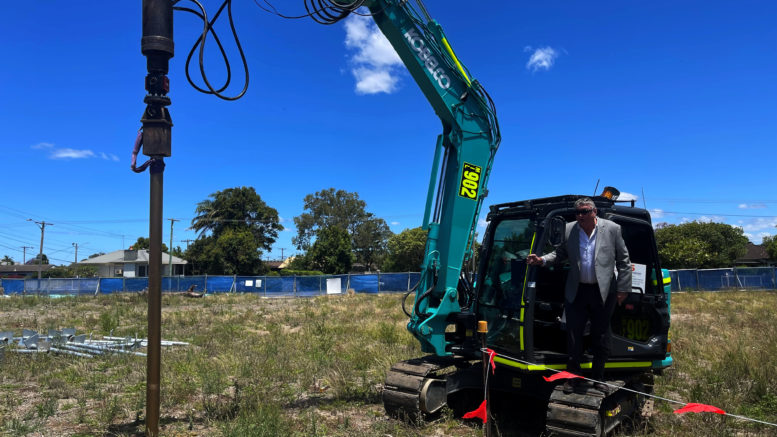 Arthur Laundy broke ground on Monday, climbing aboard the excavator

Work has finally commenced on a $10M shopping centre in Umina almost three years after the site was gutted by fire.

Owner and millionaire pub baron, Arthur Laundy, was surrounded by his family to help turn the first sod on the Lone Pine Plaza on Monday, November 15.

With champagne corks popping and the sound of the screw pile drilling into soil, around 20 residents were present to see construction officially begin on the old Umina Mall site in Ocean Beach Rd.

The redevelopment, which will be built in four quadrants, will feature 12 speciality retailers including a supermarket, commercial offices, a bottle shop, a medical centre and pharmacy.

It is expected to open to the public towards the end of 2022.

The plaza will host two anchor tenants –IGA and Celebrations – and will also house a café facing on to Ocean Beach Rd.

Laundy said it was a project he felt was “absolutely necessary for the area.

“This has been a 10-year project … it’s incredible it’s finally happening,” Laundy said.

“I think if you consider the building I bought 20 odd years ago, and the building we are constructing now … I think any person that could become a tenant now would have to be proud of the situation.

“The convenience of this shopping centre will be an absolute winner.

“I do believe we are going to give this area something to be proud of.”

Initially approved 10 years ago, with modifications approved in 2015, the development stalled for several years as negotiations continued on the purchase of two lanes behind the site.

Laundy said the redevelopment had been a long time coming.

“First there was an argument about – I owned land each side of a little, tiny Council lane – and the Council were quite happy for me to do the rebuild as at that stage it hadn’t been burnt down,” he said.

“But where the problem lay was the valuations.

“So, I said that was too big of a variation … they did theirs on squared meterage.

“We had a lot of time wasted on that and we should have been well and truly opened by now.

“There was a change of Council of course and all those things probably slowed it up a bit.

“The Council I have been working with over the past 12 months have been very, very good … they’ve been trying to help me.”

Construction started immediately after the groundbreaking ceremony on Monday, November 15, with local building company, Pluim Group, on board for the 10-month project.

He said traffic management systems such as a pedestrian crossing and bus bay would remain to help control traffic flow on the main road.

“It’s really exciting for us to be involved,” Alan said.

“There will be103 car spots as part of the updated approval to add additional spots to help the community be able to service easily in and out.

“We have seen this all the way through COVID … those retail malls which are on-grade and easily accessible … you’re in, you’re out, it’s easy.”

There will be multiple access points to the centre along with plans to install an ambulance bay alongside the medical centre.

“It’s a significant development that is certainly going to change the way local residents do their shopping and it’s been a long time coming,” Wales said.

“We are really glad that Arthur has broken the ground finally after years and years …the important thing is it’s a show of confidence in our local business leaders and developers.

“It will improve the retail mix on the Peninsula so there are options for people, and with the state-of-the-art IGA, it’s going to make a big difference for residents.

“Arthur Laundy and the Laundy Group have got a big stake in the Peninsula now with some other recent purchases.”

Member for Gosford, Liesl Tesch, said she hoped the shopping centre would help provide competitive business rents in the area.

“We appreciate your patience and the work you have done in the community and [for] people in affordable housing, to relocate them as best we can,” Tesch said.

“[It’s] a fantastic outcome for our community but also something they have been looking forward to for a really long time.

“Business rents are really high across the community so there’s quite a bit of competition … it’d be nice to see pressure put on other places to actually improve their quality, whilst this one’s going to be a really good location.

“It’s close to so many houses and just a really easy-to-use facility.

“And it’s only going to be one level which is also really important to our elderly community.

“Thank you to the Laundy family for their commitment to this region for making this an even better place to live.”