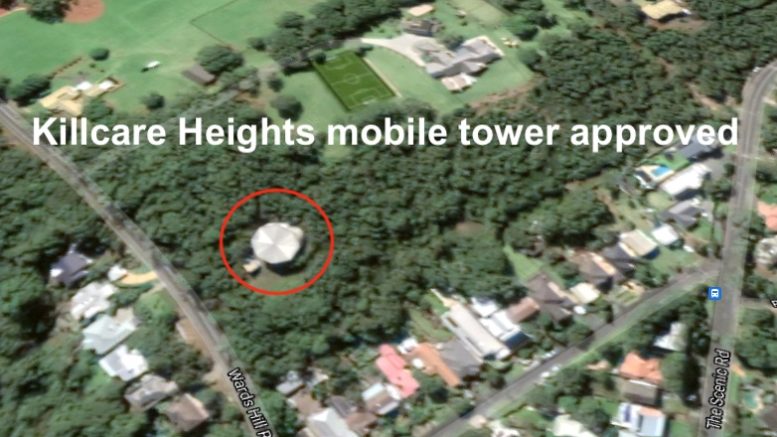 The Local Planning Panel has unanimously granted consent for a telecommunications tower to be located on Lot 1, 37 Wards Hill Rd, Killcare Heights.

The LPP made its determination at a supplementary meeting on November 15 and the proposed Optus owned tower was the only agenda item.

The application was reported to the Local Planning Panel for determination due to a variation of greater than 10 per cent to the rules around the maximum Height of Building (HOB) and due to the number of submissions received.

The application (DA57736/2019) for an Optus telecommunications facility was considered under Section 4.15 of the Environmental Planning and Assessment Act.

In outlining its reasons for approving the tower, the Panel noted that the matters raised in the Minutes of its meeting of August 19 had been addressed satisfactorily, including consultation with Darkinjung Local Aboriginal Land Council (DLALC).

The LPP received additional information between its August 19 meeting and the supplementary meeting.

According to the supplementary assessment report, that information included on September 22, a revised height variation request, revised plans and an addendum to the Statement of Environmental Effects.

The applicant made the following statements to argue in favour of the height variance: “The Applicant contends that compliance with the development standard is unreasonable or unnecessary in the circumstances of the development.

“The intent of the Height of Building Standard is to limit undesirable impacts from matters such as bulk and scale, overshadowing, solar access and visual dominance.

“Infrastructure such as telecommunications facilities, power poles and masts have far less impact when they breach the Height of Building standard than that of a more traditional building such as a dwelling, office or retail building.

“The impact of breaching this height restriction is different depending on the type of development – an office building would have a vastly greater impact on the skyline than that of a monopole of the same height.

“The proposal does not compromise the environmental outcome intended to be achieved by the Development Standard.”

Th arguments put forward by the proponent appear to have convinced the LPP.

In its reasons for approving the DA, the panel said,

the reasons for the decision as recorded in the meeting minutes said.

“Any environmental impact of the proposal is not unreasonable and is mitigated by choice and colour of materials, vegetation and design,” the minutes said.