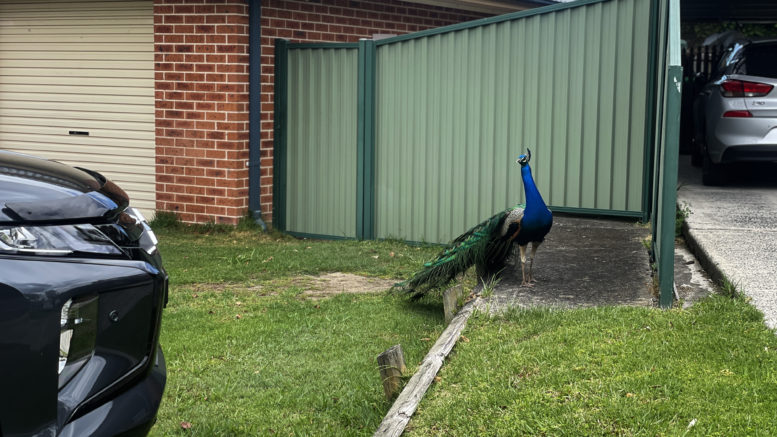 First it was a herd of goats running amok in Ourimbah, jumping on cars and gallivanting across town, now it’s a pride of peacocks causing divide in the local community.

Beautiful as they are, some locals want them gone.

A few successful breeding seasons have seen them grow rapidly in numbers, however, locals want to save them and are calling on authorities to take action and rehome some of them.

One of the residents said he had about 14 in his front yard at one time and reckons they’re a hazard.

“I cannot grow any veggies in my garden and they are dirty because they leave their droppings all around the place,” he said.

Another resident said that it was annoying to hear them at 4am but other Ourimbah residents who love having them around.

“I think they give Ourimbah a really magical quality, that’s part of the reason why I moved here, we’re so close with nature here and you feel like you’re back to your roots, it’s not like a big suburban area even though it is,” said another resident.

“I love it, there’s peacocks just hanging about going ‘hey look at me’, it’s great.”

Ivan Burns has lived in Ourimbah for 30 years and in that time he’s been caring for wild animals in the area, including the peacocks.

“I’ve had training through Wildlife ARC for several years – I’ve lost count of how many hurt birds I’ve cared for, rehabilitated and released again over the years,” he said.

But many agree, they’re multiplying rapidly and the number of peacocks is becoming a problem.

Many motorists do stop to let these feathered friends cross the road, but sadly some have taken matters into their own hands.

“It’s the idiots who treat this as a rat run and could care less about the results,” Burns said.

“I personally witnessed one getting run over here only a week ago and the person drove off like they don’t care.

“I can’t fathom anyone doing that to a wild animal and leaving it, doing its death throes in the middle of the road.

“Several good breeding seasons have resulted in an abundance, they’re everywhere and they’re causing some concerns to neighbours.

“We have to manage them sensibly, that’s the critical part of it, it’s no different to anywhere else, if you had a property and you were managing a herd of cows or sheep, if you had too many, you move them.

“If you can’t support them in the environment they’re in, then you move them to another environment where they can be supported.

“Unfortunately here, it’s evolved so fast, that now it’s come to the point where people are becoming stressed about it

“It shouldn’t be; we should be able to appreciate the wildlife that’s here,” Burns said.

And Burns wanted to set the record straight: “Peacocks do not dig up vegetable gardens, turkeys do, so do something to deter the turkeys and that will fix that problem”.

Another Ourimbah resident said his issue with the peacocks was that they were an introduced species.

“When there’s an introduced species they’re obviously going to displace a native animal,” he said.

“I believe that way back when there was only a couple of them, it wasn’t a problem but now it’s becoming a big problem, so I think something needs to be done.

“I think the authorities need to step in and have a look at this situation and deal with it, perhaps rehome them.”

CCN has reached out to Central Coast Council, Local Land Services, Wires and National Parks to see what can be done to address the community’s concerns.

Calga’s Walkabout Wildlife Park has also agreed to take some of the younger males to help reduce numbers this breeding season.

A spokesperson for Local Land Services (LLS) said that generally, each landowner was responsible for managing pest animals impacting their property.

Local Land Services assists landowners manage pest animals where there is a biodiversity risk, whick includes a risk to the agriculture industry.

They investigate reports of new incursions of certain species, such as cane toad, to prevent populations from establishing.

The plan was made with numerous stakeholders including local councils and National Parks and Wildlife Service.

“The plan does not identify the peacock as a species requiring management from a biodiversity risk perspective,” the LLS spokesperson said.

“Traffic hazards concerns are the responsibility of the local council and Police.

“It is likely that Council will have a Local Traffic Committee that addresses traffic related mater and they usually rely on traffic accident data to support decisions.

“As this matter is a non-native animal causing a nuisance on residential properties, residents can address them via a professional pest controller.