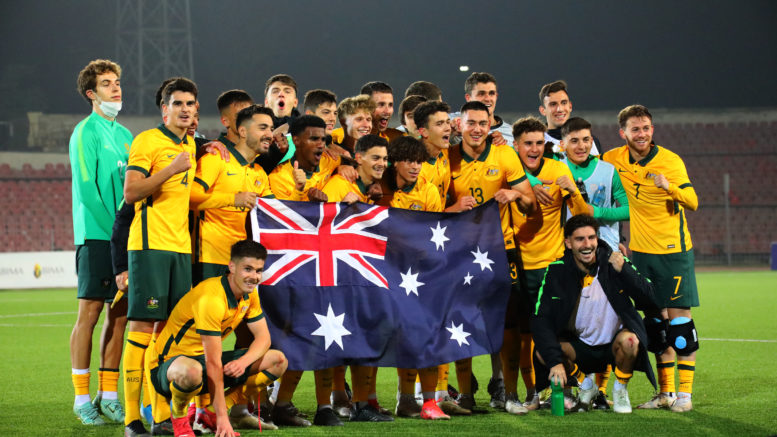 The Australian Olyroos have successfully qualified for the 2022 AFC U23 Asian Cup to be hosted by Uzbekistan, with no small thanks to Central Coast Mariner and national debutant, Lewis Miller.

Playing as a defender in the number 13 jersey, Miller was integral in securing Australia’s 4-2 win over Indonesia, played over two games at the Central Republican Stadium in Dushanbe, Tajikistan, on Tuesday and Friday, October 26 and 29.

Of the 180 total minutes of play, Miller was on the field for approximately 100, including his debut in the starting XI for Game One’s 3-2 win.

In this first encounter, Miller made a notable impact in the opening five minutes when he commenced a one-two play from behind halfway with Borussia Mönchengladbach II’s Jacob Italiano.

The move ended with Miller in the attacking box with space to shoot before a reckless challenge brought him down and resulted in a penalty.

The shot by Sydney FC’s Patrick Wood was well saved by Indonesian goalkeeper, Ernando Ari Sutaryadi and the remaining first half ended without a goal.

The deadlocked score was then altered in the 53rd minute with thanks to Brook’s graceful free-kick cross, finding the ready head of captain Mark Tokich from Mjallby AIF.

Six minutes later, the advantage was doubled on the end of a precise team passing play resulting in a tap in for Wood, making up for his earlier miss.

The opposition in red were quick to regroup and find their opening goal in the 67th minute.

It was a side-footed strike by Witan Sulaeman from outside the box, floating into the top corner well beyond any hope of being reached by Aussie keeper, Nicholas Suman.

It was sure to be recognised as the undoubtable goal of the game – that is, before a 76th minute thunder-strike by Italiano ricocheted off the side-post and into the back of the net.

The late game efforts of Indonesia were commendable, culminating in their second goal but the game ended with the advantage for Australia.

With this well-earned lead on aggregate, the Olyroos returned to the stadium only 72 hours later for Game Two: another tight affair, this time ending 1-0.

The goal came in the 10th minute after another well-placed free-kick cross from Brook deflected off an Indonesian leg and into the path of Wood, who simply tapped the ball into the net.

More scoring opportunities came for the ‘Roos who dominated possession but they were unable to again break through to goal.

The team managed to secure a clean sheet, contributed to by Miller once he was subbed on in the 78th minute.

Football Australia National Technical Director, Trevor Morgan, who is coaching Australia’s U23s on an interim basis, was pleased to see his team’s defence become more compact in Game Two after falling out twice in Game One.

“There were many times throughout the two matches where the players produced the level of football that we expect to see – they played positive football, controlled the games, and found opportunities to score,” Morgan said.

“I’m sure the boys know that to go to another level both individually and as a team, they need to reproduce those moments more consistently.”

Morgan also commented specifically on Miller’s performance from Game One, commending the 21-year-old particularly on his attacking play from the back line.

“Lewis’s desire to play for his country is matched by his intent to get forward and contribute to our attacks,” he said.

“He is a tremendous competitor which is a valuable asset as a fullback.

“Lewis is also very willing to take on board tactical information to help contribute to the team style of play.”

“In the second game, he was very strong defensively, kept possession and contained his opposition very well – he pretty much had a perfect 20 minutes to be fair,” Schembri said.

“In the first game he provided an attacking flair to the side and we were delighted with his efforts.

“Lewis has always played with an attacking tendency and that’s why we (the Mariners) moved him into the right back role.

“That’s why he added value to the Olyroos squad – because he’s a boy who likes to drive in possession.

“That’s his strength and it’s why he’s with us.”