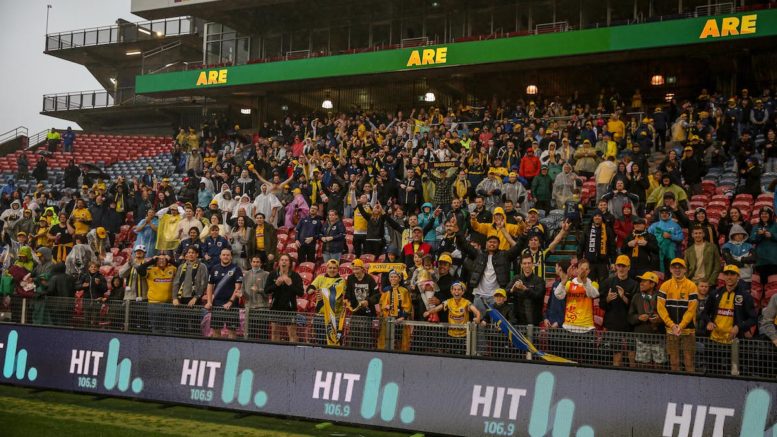 A cold and windy Sunday afternoon in Newcastle reaped A-League dividends for the travelling Central Coast Mariners, starting off their season with a 2-1 win.

The F3 derby at McDonald Jones Stadium offered up its usual high stakes performance in the contest for regional football supremacy, in the end granted to Nick Montgomery’s boys and thanks to goals scored by a couple unlikely candidates.

Working hard behind these two was Marcos Ureña and Cy Goddard, two international signings responsible for the two assists.

With this in mind, hats off to the Gaffer for combining a new and old mix of Academy products with diversely talented visa players.
Nonetheless, it was an arduous first half for the away side spent mostly on the back foot of possession and shots count.

Returning goalkeeper, Mark Birighitti worked hard throughout this opening 45 to keep the scores level, making numerous saves whilst his team took time in finding their feet.

Montgomery’s decision to play Nisbet in the attack alongside Ureña began fruitless and raised questions regarding the absence of more obvious candidates such as Matt Simon and Nicolai Müller.

However, these concerns soon dissipated like the bright dew on wet grass that helped slide Nisbet’s ball past Jets keeper, Jack Duncan, for the game’s opening goal in the 50th minute.

The opportunity was initiated from the acute pressure of Max Balard in the midfield who jumped onto Mathew Jurman’s heavy pass to Kostandinos Grozos and forced the dispossession.

The loose ball fell to Ureña, who marched forward before setting Nisbet loose with a perfectly placed through-ball into the penalty area.

The story improved only seven minutes later with a second goal to double the advantage, this time scored from Goddard’s pristine corner into Farrell.

The inward-swinging crossed ball floated above the heads of the players in the box before finding an unmarked Farrell on the run by the far post, and then a diving header by the debutant knocked the ball hard above Duncan’s outstretched arms.

With a cushioned lead heading into the final third, the Mariners kept the Jets at bay until a corner routine brought the ball to the accurate head of Valentino Yuel who knocked the ball through for his team’s first season goal.

The shimmy and turn by Angus Thurgate was enough to get half his body ahead of Daniel Hall in defence and pull off an outward swinging cross to Yuel leaping ahead of Lewis Miller; at point blank range, Birighitti didn’t stand a chance.

The return goal brought the contest right back into heat for the remaining 15 minutes with the Jets pounding on the Mariners’ door multiple times.

Yet after seven minutes of injury time, the score remained 2-1 with the Mariners securing the three points and winning back-to-back at McDonald Jones for the first time in A-League history.

Their next contest will be another away game against Wellington Phoenix to be played at Win Stadium in Wollongong on Saturday, November 27.