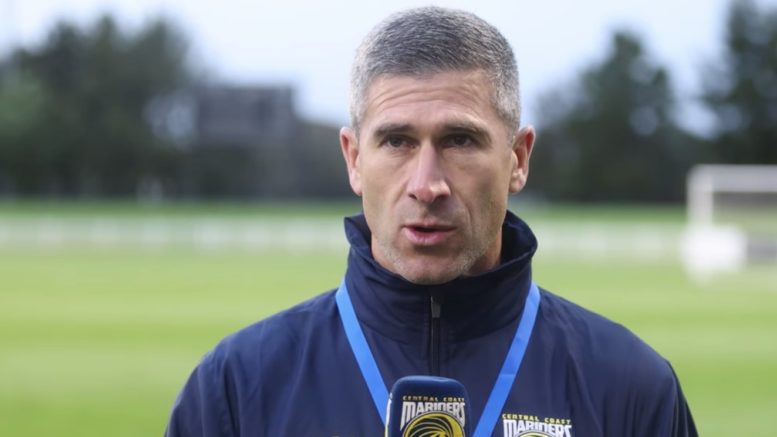 The Central Coast Mariners have started the new season well with an FFA Cup win against Blacktown City FC in the Round of 32 elimination match.

Played on Saturday, November 13 beneath swirling wind and rain in Mudgee, the 1-0 result was hard earned for Head Coach, Nick Montgomery’s fresh-faced team, with many squad members experiencing their competitive debut.

International debutant, Béni Nkololo was responsible for the 76th minute goal that ultimately decided the fixture, making good on his promising left foot with a well-curved shot to find the side of the net.

In midfield, Storm Roux joined Joshua Nisbet and captain Oliver Bozanic; together they spearheaded the team’s 73% total possession and reduced Blacktown’s threat on goal to a number of spontaneous, yet dangerous counter-attacking moments.

The defensive line was maintained with debutant, Jack Farrell on the left who held his position and showed signs of his potential as an effective forward runner and ball crosser.

Up front, veteran, Matt Simon brought his usual high energy and resilience until being substituted with 10 minutes of play for first team scholar, Damien Tsekenis.

Two more international newcomers, Matheus Moresche and Cy Goddard were given the run on late and had chances to double the team’s advantage without result.

Despite remaining in the balance until the final whistle, the win has ensured the Mariners entry into the FFA Cup Round of 16, with details to be confirmed soon.

“Blacktown came with the game plan to sit in and let us have the ball and try to frustrate us, with 10 men behind the ball for most of the game which allowed us to have a lot of possession.

“If we got an early goal it could have been a different story but all credit to Blacktown… we just needed that one moment and that came from Béni in the second half.”

For Béni, scoring his first goal in competitive Australian soccer was a positive lift for himself and the team ahead of the A-League season commencement this coming weekend.

“Today we are happy after this result, we won the game and I think that’s most important for the club,the fans and the region.”

Now, the team prepare for the opening A-League fixture to be played at McDonald Jones Stadium against the Newcastle Jets on Sunday, November 21.

The Mariners will now play in The Round of 16 against the Wollongong Wolves at a venue and date to be announced.