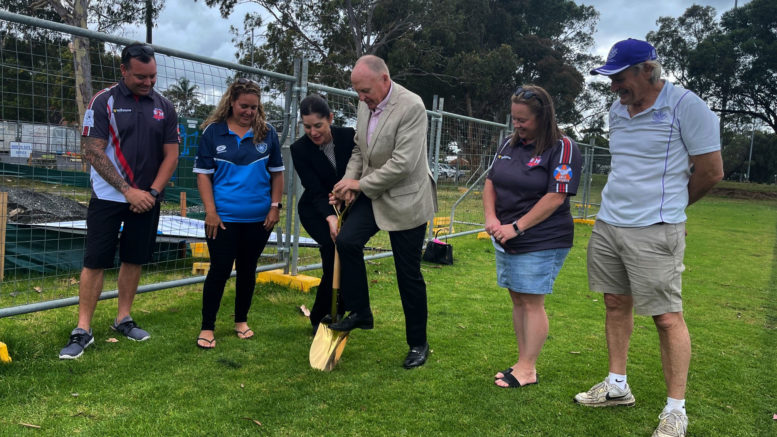 Construction has started on a new amenities building at Rogers Park, Woy Woy, with the first sod turned on Monday, November 8.

The $1.5M project was jointly funded by Central Coast Council and the Federal Government and is expected to be completed by the start of the Winter sports season in April 2022.

The building will be shared by the community and local sporting clubs including Woy Woy Junior Rugby League and Peninsula Junior Touch Football.

Representatives from Woy Woy Junior Rugby League, Brooke Preston and Daniel Tonkies, said the club was overjoyed by the news.

“The upgrade will give us some changing facilities which is really important because we have girls’ teams now, so they will finally have their own space to get changed,” Preston said.

“It will also give us a nicer canteen facility, something that we can all be proud of.

“In the past, anytime it rained, the water would leak in and ruin our supplies.”

Nicole Steed from Peninsula Junior Touch Football said the upgrade will be a welcome change from the facility of past.

“We are really looking forward to having disability access and, working from a demountable canteen for the past five or more years, to have a nice canteen that is actually stable will be fantastic,” Steed said.

“We will also have a large storage area, so we don’t have to take things home anymore.

“In the past, we’ve turned up here many a time to homeless people sleeping underneath the steps.

“They were demountable toilets with broken steps, with weeds growing up the toilet, you could see underneath the toilets when you were in there … it was pretty bad.”

The local club representatives said it had been a long time coming with their first conversation about the upgrade over two years ago but said the consultation process couldn’t have gone better.

“We had our first conversation two years ago and then about two days later, the existing facilities were condemned,” they said.

The project was funded by the Federal Government under the Community Development Grants Program for $800,000 and Council for the remaining $550,000.

Council Administrator, Rik Hart, said works had been made possible through a collaborative partnership with the Federal Government.

“The new sports amenities building at Rogers Park is designed to meet the needs of the Peninsula’s growing community and support local sporting groups,” Hart said.

“It has all the sort of things you’d expect in a modern facility – it will suit the community for some time into the future.

“Whilst the facility would’ve been good for its time, the world’s moved on and you need to provide facilities for disabled people and equal facilities for male and female.

“A lot of the [funding] is renewal money … [and] because of the existing site here, the depreciation and maintenance costs still keep going so what we get is the new capital to spend on it.

“The existing costs are already accounted for it in our budgets.

“It’s a great win for the community.”

Federal Member for Robertson, Lucy Wicks, said the project, which was part of a 2019 election promise, will be “incredibly important” for local clubs.

“The start of construction is an important step forward to ensure local sporting clubs have safe, clean and useful facilities that support the important work they do in our community.

“When I visited the building in 2019, the amenities building at Rogers Park was falling apart and simply wasn’t serving local sporting clubs in the way they needed.

“The facilities were really dilapidated, they were aging, it was incredibly frustrating – for example, club members told me about people who couldn’t come and see their games because there wasn’t any access to disabled toilets.

“It’s going to be so much more inclusive now.

“I am excited for the around 1,500 young people on the Peninsula who play cricket, touch football or rugby league who will have access to some of the best sporting infrastructure around the Central Coast.

“This is expected to generate around 12 local jobs which is great for our local economy.

“We know how important this upgrade is for the clubs that use this oval and these facilities.”

Wicks said the upgrade was part of a wider focus into aging infrastructure on the Peninsula.

“There’s a lot of aging infrastructure on this side of the Central Coast and it has been one of the things that we have been focusing on,” Wicks said.

“The desire for new amenities blocks here is not a new one … I’m also looking forward to seeing, in time, the Peninsula Recreation Precinct upgrade as well.”

Wicks said the funding agreement on the precinct has now been completed.

It is expected that further information surrounding the project including construction details and timeframes will be released in coming weeks.

Preparing for a COVID-safe summer