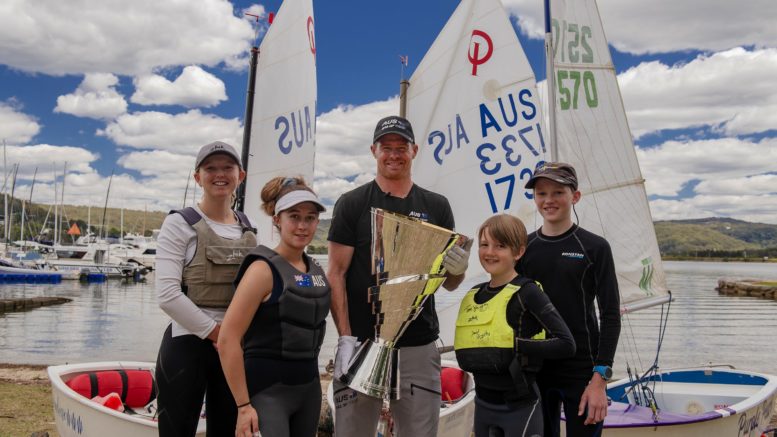 In between participation in two world championships, Olympic Gold medallist, Tom Slingsby, has returned to the Gosford Sailing Club armed with the Sail Grand Prix (GP)Championship Trophy that his Australian team will soon defend on Sydney Harbour.

The Under-12 and 14 club members jumped at the opportunity to hear and learn from their club’s most accomplished alumnus.

Gosford Club sailing manager, Peter Walsh, also attended the event and reflected on how uplifting it was for the juniors.

“The kids have been through a pretty hard time with community sport being denied them through the COVID lockdown so it was such a positive morning to be able to listen to what Tom had to say and then put it in practice out on the water,” Peter said.

“Although the day was organised through Sail GP, we didn’t actually know Tom was going to be the one to come here… we were lucky that it was a natural fit for Tom because this is his club.

“Tom was able to coach the kids for an hour or so, giving them tips on the water, then there was an opportunity to come back and debrief with a Q&A session.

“Then the kids were handed out shirts from Sail GP, they got autographs and an opportunity to see the Sail GP trophy.”

The Sail GP Championship Trophy is immaculate in its design, crafted by Thomas Lyte, maker of the Webb Ellis Rugby World Cup.

As this is only Season Two in the history of Sail GP, the Trophy so far knows no other life than in the hands of an Australian.

With the overall points lead heading into the penultimate, two-day race event on home waters, Slingsby and his six Catamaran teammates are in a great position to ward off the nine other national contenders.

Nonetheless, it is only a one point lead the Aussies hold over the USA who will host the final event in San Francisco, March 27-28.

With one month still to go before race day and only a little over a week since completing the 52 Super Series in the waters of the Mediterranean, Slingsby found the time to give back to the next generation of sailors.

“I wanted to repay that support by taking the trophy to the Central Coast, which has been my second home over the years, and celebrate with a community which has supported me throughout my career – and hopefully inspire the next generation of Sail GP aspirants as well,” Slingsby said.

“It was awesome meeting the kids today, who could one day be competing for their country.

“I hope that by sharing my journey from being a young aspiring athlete to now representing Australia in Sail GP, I’ve taught them that with both hard work and a belief in yourself, you can achieve great things.

“We hope that this Regional Trophy Tour will encourage these young sailors to pursue their dreams in the sport.”

At the conclusion of Slingsby’s regional tour, his focus will shift entirely to Sydney Harbour, December 17-18, the scene of Sail GP’s penultimate series event.

On offer is a winner-takes-all $1MUS cash prize, as well as another accomplishment to add to Slingsby’s wall.