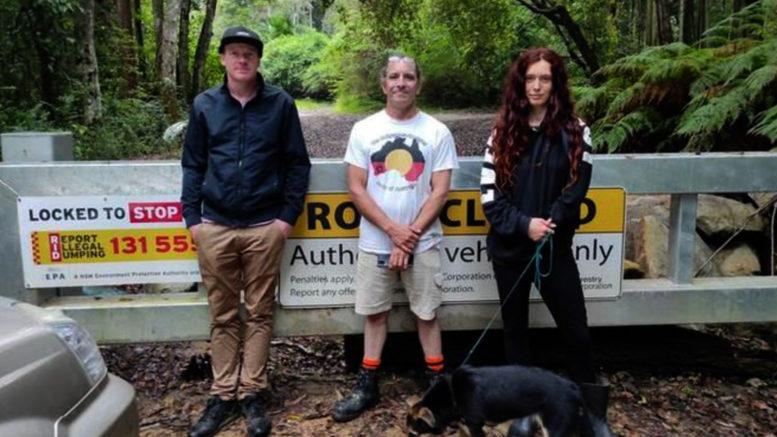 The new Indigenous-Aboriginal Party of Australia (IPA) has come out in support of local group, Camp Ourimbah, over “appalling” plans to continue logging in Ourimbah State Forest.

The IPA has a large membership on the Central Coast and last week Brett Duroux, the IPA’s candidate for the Page electorate on the mid north coast, visited the area to see the cultural site firsthand.

He said he wanted to learn more about NSW Forestry Corporation’s Harvest and Haul Plan which could potentially impact the site.

“Forestry’s plans are concerning as the cultural site is not identified as such on the harvest maps that they operate under, and instead are noted as being an ‘other significant area/non harvest area (OSF)’ with no buffer required for logging,” he said.

“The plans state that trails and roads can be used for haulage and snigging if they traverse through the exclusion area.

“This is extremely alarming considering a cultural site is at stake and the rock platform the site is located on has already been damaged in the past by heavy machinery tracks.”

“The OSF is also a known koala habitat, despite Forestry’s plans stating otherwise, however, they have included a safeguard in their plan which means a dedicated person must check in each tree before it is cut down,” Duroux said.

“If a koala is detected, they must wait for it to move on before then cutting the tree down.”

The Forestry Corporation’s Harvesting and Haul plan covers an area of over 370ha of which 108.4ha is deemed “harvestable”.

Forestry Corporation is a state-owned corporation which owns and manages more than 276,000ha of softwood and hardwood plantations and manages two million hectares of public native forests in NSW.

Duroux said more than three billion animals, more than one billion of them in NSW, were estimated to have been killed or displaced in recent bushfires, including some rare or threatened animal, plant and insect species, with the complete loss of some species believed to be permanent.

“In NSW alone, more than half of the native forests were burned in the 2019/20 bushfires, with one billion native animals killed or displaced… and yet, the NSW Government continues to desecrate our native forest and cultural sites, to harvest pulp and firewood for an industry that runs at significant financial loss.

“In 2019/20 the profit from native forest logging was $28 a hectare, equating to less than 20 cents for each mature tree logged.

“The Government provided $136M in grants over the past 10 years to this unprofitable industry, equating to a huge loss for NSW, both financially and environmentally.”

Duroux said he believed Central Coast Council had colluded on the plans despite its ongoing public relations campaign applauding the Coast’s Aboriginal heritage and OSF, winning awards for being an Adventure Tourism destination.

“There is nothing positive about native forest logging,” said a Camp Ourimbah spokesperson.

“The negative impacts are exponential, including loss of habitat and biodiversity leading to further species extinction, loss of international respect, loss of income in eco-tourism, loss of cultural heritage sites and greater bush fire risk.

“The Central Coast has prime bushland that needs protecting as one of the state’s remaining strongholds of native forest after the Black Summer Bushfires.”

Duroux said the Indigenous Party of Australia would be writing to local politicians and State ministers, including Environment Minister, Matt Kean, demanding an end to the unprofitable, damaging practice of logging in native forests, including Ourimbah State Forest.