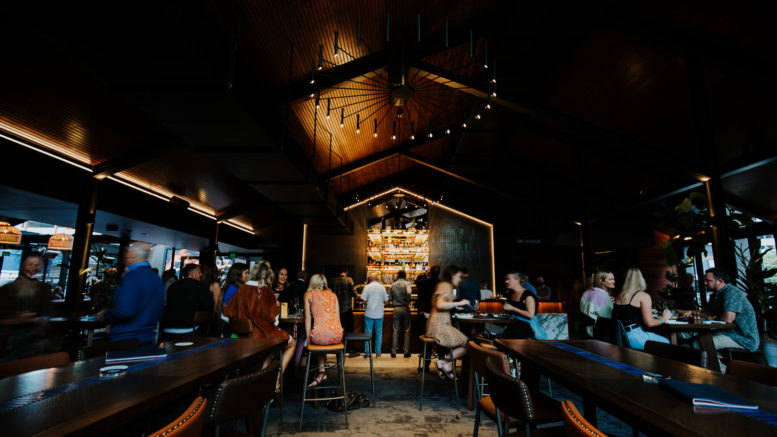 One of the newly renovated areas of the hotel Photos: Will Wood

The new look Hotel Gosford has reopened after 18 months of renovation which included a complete knockdown and rebuild of its restaurant.

Group General Manager and investor, Jordan Harris, said the renovation had been 10 years in the making.

“Our first concepts were drawn up back in 2010 and truthfully, back then, we couldn’t have dreamt of it turning out as incredible as it has,” he said.

Raked ceilings have been installed in the new area to create a sense of space, drawing the eye to high windows and a butterfly shaped roof.

The new main area features exposed brick, steel and raw concrete, with the tall brick walls of the main façade mirroring the original colonnades of the historic building that stood in the 1920s.

The Saloon and the VIP lounge also have a new look, courtesy of Bergstrom Architects and Evolve Constructions.

The heritage-listed hotel has been part of the Central Coast’s social scene since 1926.

Family-owned and operated, Hotel Gosford was purchased by local publican Peter Harris in 1998.

His family remains at the helm of the hotel’s operations, with son, Jordan, now overseeing the day-to-day running of the venue along with the renovation.

The family is fiercely passionate about keeping the venue’s history alive while creating a new and contemporary space.

“We pride ourselves on our capacity to make so many elements of our dishes in house,” Jordan Harris said.

“At Earl’s Kitchen, our new Head Chef, Mark Wisemen, and his team source a variety of ingredients from local suppliers, growers and producers.

“Hotel Gosford loves the community, loves the Central Coast and loves engaging and supporting other local business owners as much as possible.

“Chef Wisemen has spent the past few months working around the clock to source everything from local suppliers, cutting the middleman out and supporting the hard-working local producers.”

Starting off as a baker/pastry chef in 1998, Wiseman has worked in a number of jobs across the food industry including at restaurants in Sydney and Melbourne.

Taps in all four bars at the hotel feature all the iconic brews along with an impressive range of boutique and independent craft beers.

“When it comes to our wine list, we have a wide variety of locally sourced and handpicked labels,” Harris said.

Hotel Gosford hosts a CBD Social each Friday, Trivia on Tuesdays and High Society Saturdays, featuring a DJ accompanied by a live vocalist or saxophone player.

Patrons can enjoy resident Sunday soloists and cheap spritz in the beer garden from 2pm plus a Sunday Roast at Earl’s Kitchen.

Additional features at the new-look hotel include: top of the line surround sound and DJ system; 5m Mega Screen in the beer garden; retractable roof in the beer garden; newly painted historical Resch’s mural on the external wall of the hotel; and indoor pots and gardens from Sustainable Surrounds.

“We are so proud of what we have achieved and hope it brings a new lease on life to the CBD of Gosford,” Harris said.