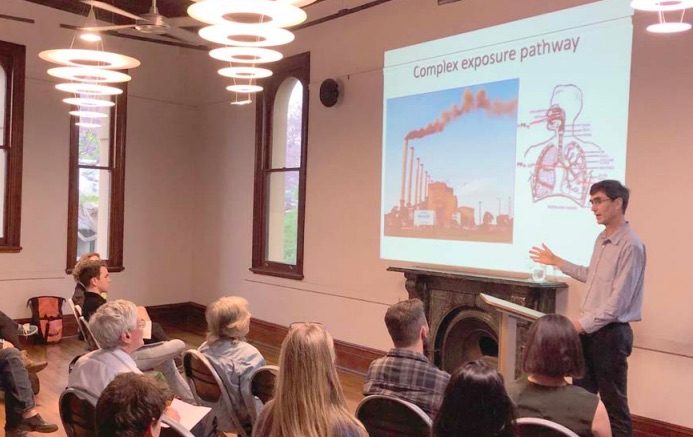 Delta Electricity, the operator of the Vales Point Power Station, has rejected claims by community and environmental groups about air quality, labelling them as factually incorrect and misleading.

The latest concerns about air quality from the Nature Conservation Council of NSW and local group, Future Sooner, came when Delta applied to the EPA for a further five-year exemption to the set emission limit for nitrogen oxide (NO2) at Vales Point Power Station.

Company spokesperson, Steve Gurney, said “this is a collection of anti-coal activists with one objective, to shut down coal-fired power stations”.

He said the power station operated in accordance with strict environmental licence conditions, with diligent oversight by the Environmental Protection Authority (EPA).

“Independent EPA analysis consistently shows that air quality on the Central Coast and Lake Macquarie is very good and amongst the best in NSW.

“Specifically, monitoring has shown that NO2 concentrations were either very good or good at all monitoring sites at all times.”

Gurney said the sensationalist claims had consistently been discredited when tested by reference to independent analysis, air quality data or by scientific peer review.

He referred to a report by Environmental Risk Sciences, commissioned by the Australian Energy Council, which discredited claims made by epidemiologist and environmental activist, Ben Ewald.

“A recent peer review of the (Ewald) report, relied on by these groups, found that the base data was not referenced in the report and the results were exaggerated, appearing to use total NO2 concentrations in estimating the number of asthma cases, not just the emissions from power stations.”

The Environmental Risk Sciences report stated that the Ewald report “estimated emissions and potential concentrations using a very rough approach” and that a “review of this approach indicated that it should be considered flawed and misleading, not based on good science”.

Gurney said a further peer review of the Ewald report, relied on by environmental groups to support their claims of increased asthma rates in children, found the results were exaggerated, appearing to use total NO2 concentrations in estimating the number of asthmas cases, not just the emissions from power stations.

“It should be highlighted that the largest contributor of ground level NO2 is vehicle emissions,” he said.

“The Transport for NSW data shows that for 2021 there was an average of 65,317 daily traffic movements on the M1 Motorway (measured at the Calga Interchange), so to single out power stations without recognising other leading causes of NOx emission is simply misleading.

“These activists also seek to selectively apply overseas emissions standards from selected countries that have large industrial activity nearby to high density populations.

“OECD figures (in the Green Growth Indicators 2017 report) show that a genuine air quality issue needs to be addressed in those circumstances.

“The OECD shows that the experience in NSW does not remotely compare to those situations, with Australia and New Zealand having the lease health impacts.

“Once again, we see activists misleading the public in a scare campaign to achieve their real agenda of closing power stations,” Gurney said.

Delta’s Environmental Protection Licence (EPL) was renewed by the EPA in July 2020 after considerable input from the community and other groups.

Gurney said that notably, limits for emissions such as oxides of nitrogen have already been tightened as part of this renewal process and Delta continued to comply with these reduced limits.

Power stations are licensed and highly regulated, with detailed scrutiny by the EPA.

Environmental data as required under Delta’s licence is posted on Delta’s website monthly for all to see.