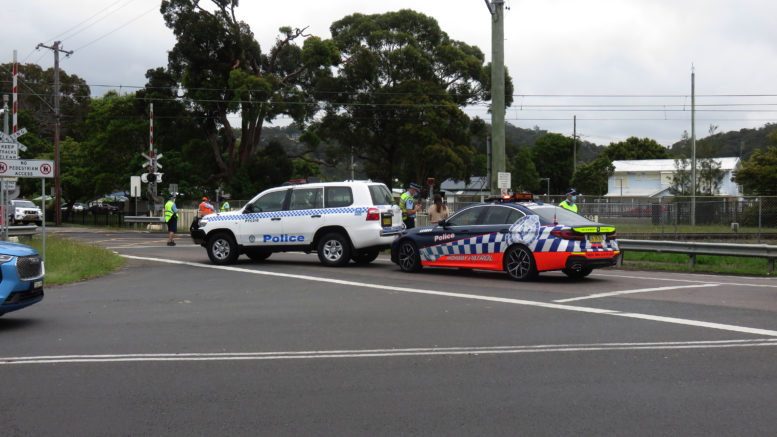 A car was clipped by a train at the level crossing on Rawson Rd, Woy Woy on the morning of Tuesday, November 24 Photo: Always Askew

About 9am on Wednesday, November 24, emergency services attended the train line on the Rawson Rd level crossing at Woy Woy after reports of a car on the train tracks.

Police were told the car stopped on the railway tracks at the level crossing before the train clipped the car.

The driver of the vehicle, a 64-year-old woman, was uninjured and checked over by NSW Ambulance paramedics.

Both the driver of the vehicle and the train driver underwent mandatory testing and provided a negative breath test.

Officers from Brisbane Water Police District attended and commenced enquiries, and the road was closed for approximately 90 minutes.

Member for Gosford, Liesl Tesch, said the incident was a wake-up call for the NSW Government and their decade long broken promise to replace the level crossing.

The NSW Liberal Government made the commitment to fix the dangerous level crossing in 2011 during the state election campaign.

In 2016, the NSW Liberal Government walked away from the commitment due to cost blowouts and disagreements with the former Gosford City Council.

“A decade later, the level-crossing remains in place and the NSW Liberal Government still has no plan to fix this chronically dangerous part of our transport system,” Tesch said.

She said she had written to the NSW Transport Minister asking for an update about the 2011 NSW Government commitment and what plans Transport NSW had to make the level crossing safer.

Tesch said she had already raised concerns with Council Administrator, Rik Hart, about the level crossing and would again urge Council to work with the NSW Government to prioritise investment for an appropriate solution.

“I hope the Minister will understand the Woy Woy level crossing is an urgent safety concern for residents,” Tesch said.

Local resident, and witness to the accident, Steve Larkin said “all you heard was a boom and the car had turned sideways.

“I am happy no one was hurt but it can be dangerous.

“You get the odd person who wants to beat everyone home but usually most people are pretty careful,” Larkin said.

Level crossing safety was raised in the NSW Parliament last week by Shadow Minister for Regional Transport, Jenny Aitchison after another death in rural NSW.