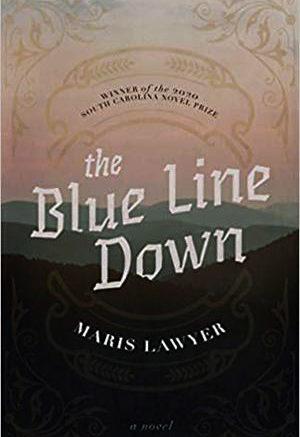 The Blue Line Down is a book I chose after seeing it pop up on Kirkus Reviews (one of the sites I look at to help me chose books).

This is a debut novel about Jude Washer growing up in West Virginia in the early 1900’s.

His father works in the mines and that is where Jude’s future is heading.

His mother passes away while giving birth to Willis and that is when Jude’s life falls apart.

Jude’s father blames Willis for his wife’s death and punishes him harshly.

Linnet Myers, a neighbour comes to the house to help put but eventually she marries and has her own children to tend to leaving Jude and Willis at the mercy of their cruel father.

Willis grows up but still bears the brunt of Pa’s punishments.

Eventually he goes to school and Jude has a sense of relief as he can keep an eye out for him, but he can’t watch him all the time and sometimes Jude would come home, “to find Willis with a boxed ear.

Jude did not let on that he knew about the beatings.

He did not know how.”

During one brutal punishment Jude tries to pull his father off Willis but Willis is so ashamed he runs into the mines to hide out.

The mines will extol the ultimate punishment and Jude will be in such pain he does something to punish his father … but which will punish others as well.

Jude ends up with the Baldwin-Felts, a group of thugs who are hired to squash mine workers from unionising, by any method necessary, and that doesn’t mean by talking.

There is a particularly brutal attack on a mining camp where Jude’s underling, Harvey Morgan is wounded when he speaks out about the cruelty.

Jude decides he has had enough and takes the injured Harvey on a journey that will lead them down to South Carolina where they meet some bootleggers who they now owe a debt to.

But the Baldwin-Felts aren’t going to let them get away without a flight.

This is a fast pace novel with some gritty writing set against a backdrop of the Appalachian coal wars and the bootlegging South – an engaging step back in time a hundred years ago during the times of prohibition and outlaws.

It is a story about violence and suffering, revolution, morals and redemption.

Jude is a person in pain that made a terrible decision, but he will try to make things right.

The descriptions are so detailed you can almost view the movie version.

It isn’t a long book but it sure packs a punch.

For those of you who aren’t familiar with this section, I am an avid book reader that writes about the books I read. I am a simple person with simple views on what makes a good story. I choose books that I want to read, usually from acclaimed lists (so most are pretty good, but some can be surprisingly bad). I always write what I honestly think and, as reflected in the Editor’s name for me, I do it all a little bit reluctantly.

I have read some books from some amazing local authors – Dr Kwong, Donna Cameron and Nina Angelo all come to mind – and have written reviews on these. Over recent months however, I have had a lot of requests to review more local authors’ work, many in the form of unpublished manuscripts or self-published titles. While I do look at these requests, if you don’t see your book reviewed, it means it just wasn’t working for me.