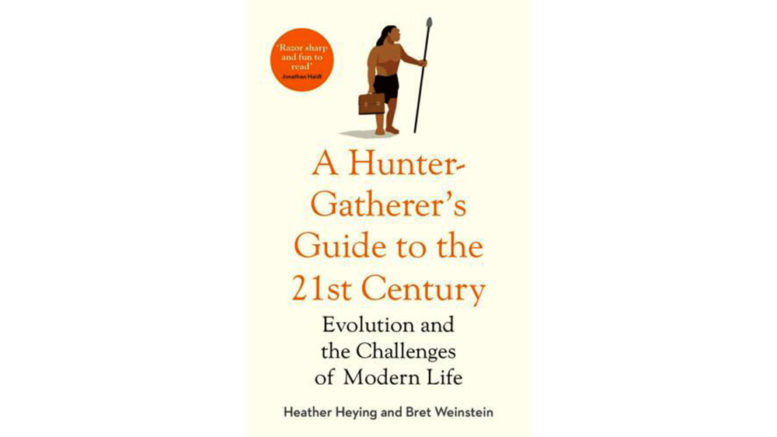 As you can tell from my reading list, fiction is my preferred genre, however there are times I like to dabble in the non-fiction world.

When I read the summary about Hunter-Gatherer’s Guide to the 21st Century, I thought it was going to be a book that would make me smarter.

We are living in the most prosperous age … and we are miserable.

The world has moved at a rate that is too fast for humans to adjust or adapt.

So let me learn more, make me smarter!

I thought I wasn’t going to make it.

They begin with updating the reader on how humans came to be, evolution, then zone in on most aspects of human life including, medicine, food, sleep, sex, parenthood, childhood, etc.

Looks like there is not one aspect of life that cannot be fixed with some advice by the authors.

There are a lot terms in the book that were new to me.

For instance, “the best, most all-encompassing way to describe our world is hyper-novel”.

Meaning that change is happening faster than humans can adjust.

There are WEIRD countries: Western nations, with a highly Educated populace, an Industrialized economic base, that are relatively Rich and Democratic.

You seriously have to dig deep down to come up with that acronym.

There were also heaps of scientific terms that tended make it clunky to read (for the unscientific mind like mine at least).

The end of each chapter has a section called “The Corrective Lens”, with dot points that summarise the chapter and offers advice on how we can do things better.

For instance, after the chapter called Medicine, the sage advice is to “Listen to your body”, “Move your body every day”, “Resist pharmaceutical solutions for medical problems if you can.”

But then after Sleep some of the advice is, “Get closer to the equator at some point during your winter” and “Restrict outdoor blue-spectrum light at the societal level.”

Sure, easy for some.

And then some of the advice is just downright preachy, “Avoid sex without commitment”, “Avoid dating apps”, “Sit around more campfires”.

While the beginning started slowly for me the middle was quite interesting.

I stared riding the wave, but that ride only lasted a few chapters until the wave crashed and it started getting slow and oh so preachy.

I think this book was a good idea that went wayward.

I hadn’t heard of Heather Heying nor Bret Weinstein before.

A quick Google check uncovered that they are biologists who taught at Evergreen State but left (under “trying circumstances”).

They now run podcasts and are vocal anti-vaxxers for Covid-19, instead taking Ivermetcin, a de-worming medicine.

I read their book thinking it was going to make me smart.

That was pretty dumb of me.