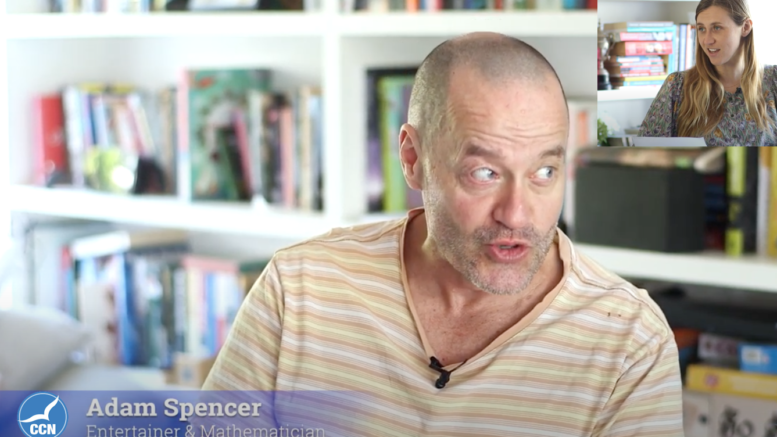 Adam Spencer is a media personality, radio host, writer, comedian, chess enthusiast and a Mathsgeek who now lives on the Central Coast. This multi career juggling wizard has a powerful mind and sits down with me to chat about everything from layers of comedy to Mathematics and Artificial Intelligence.

To watch the full interview head on over to AMPED on Youtube.

We started off the conversation with Adam recounting how he remembers different layers of comedy being revealed to him as his mind was able to take on bigger concepts and how this was similar to his Maths journey.

“The interesting thing about laughter is that as your mind develops and your able to take on bigger concepts, you appreciate different levels of comedy”

“I remember realising there are layers to comedy, and that it was very similar to mymathematical journey, as you start to appreciate calculus and group theory, but I can admit that my love for numbers preceded my love for laughter”

I asked Adam how he has had the drive and ambition to work across different fields.

“Well I’m easily bored and in a lot of the things I started down the path of, I never really finished so I didn’t really have any choice but to give it a red hot go.
I started a law degree at Uni and left it after 3 years to pursue a pure Maths degree, so I couldn’t go back to law so I had to give a pure Maths a go, even though I hadn’t done enough in the Maths”

“I won the comedy competition which got me into Triple J, so I had to sort of give that a go, and it was the breakfast show that was the first thing that made me feel like I had a job for the first time.”

“Of course you have to have drive, but I have a tendency to be all in or nothing naturally.”

“My greatest frustrations in my life, is when I don’t try enough.”

“I would always prefer to know my limitations, where as someone else might not want to know.”

I asked Adam how he thinks Maths to be beautiful when so many people’s experience has been different, including me.

“Maths is absolutely beautiful it’s just the way you’ve been taught that makes it not. People don’t understand it, but that doesn’t mean it’s not beautiful, I would say its inherently beautiful”

Adam agreed with me that maths gives him meaning to his life, that his life is mathemtcail in the sense that he feels theres always an optimal solution for everything, including tying your shoelaces, which he can’t understand why anyone else hasn’t learnt to do that.

Adam trys to be so efficient in his life that even the way he shops has a certain way.

Adam and I spent the next little bit talking about the philosophy of Maths.
I was under the impression that mathematics was a system that was invented by humans and wasn’t necessarily a universal law. That the system only worked because we all agreed on it. For example, ‘zero’ was invented after the discovery of the number one and implied the absence of a number which took a certain level of brain power to create.

Adam pointed out that this wasn’t necessarily the case although there are mathematicians who believe different things, he believes Maths is there waiting to be revealed to us and it would exist with or without us agreeing upon it.

“There are certainly deep questions that mathematicians don’t know the answers too and there are situations where there are multiple answers for the same problems, but yet they both can’t be true at the same time.”

“There are some problems in Mathematics that we will never be able to solve, they could still be true, but the tools in the system are not sufficient to answer it”

“If we went back and started again with mathematics, thousands of years on would we have the same system of mathematics, whilst there are a number of more highly qualified mathematiciansthat me, the vast majority, and I’m in this camp would agree that no, we only have one mathematics and we just come to it, we reveal it to ourselves.”

“If you had a planet filled with dogs, the Maths would still be the same there, it’s just the dogs couldn’t work it out”

I asked Adam what he thought about mathematics and the future of artificial intelligence.

“Some people have a program in the UK called deep mind, they teach this program the rules of chess and it goes away and in four hours can play 5 million games against parallels of itself and is better than the world’s best dedicated chess playing program.”

“If you look at that progress in 40 years you’ve gone from a human can beat all the best machines in the world at the one time, to a machine teaching itself in a couple of hours to be better than any human being who could ever conceivably be”

“There’s absolutely some ethical dilemmas, but its unavoidable, so let’s agree not to run away from it.”
“There’s two problems criminals making AI and people who want to do good with AI but haven’t thought about it enough, so its systems that are biased”

Adam has just released a new book which you can find on Booktopia called Adam SpencersMaths 101.
It’s a practical handbook for parents to teach their primary school aged kids mathematics.