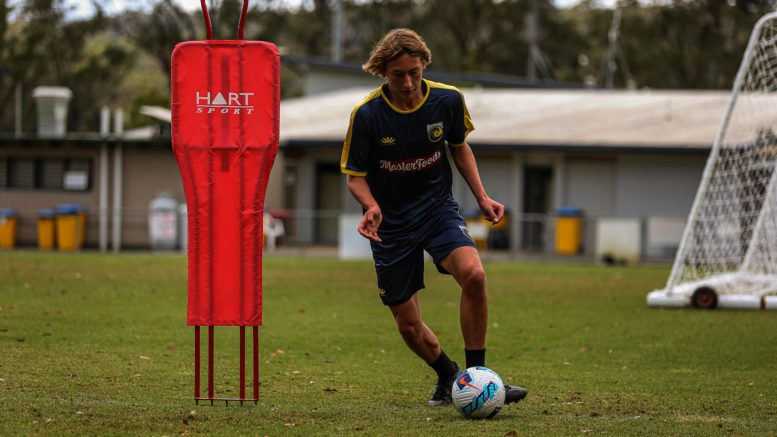 The Central Coast Mariners have promoted another long serving local Academy player into the ranks of their first team, this time signing 18-year-old, Jacob Farrell.

With junior football experience playing for the Wyoming Tigers FC, Central Coast Sports College (CCSC) and Combined Independent Schools (CIS) representation, as well as admittance within the Mariners Academy since Under 12s, Farrell is a true example of locally grown talent who will now have the opportunity to show his worth in top tier football.

Throughout these junior years and true still today, the people who have watched his development closely agree that he is driven to succeed, focussed on improvement and dedicated to following the directives of his coaches.

Wyoming FC Coach, Ian McAndrew revealed this to be the primary reasonings for selecting him into the CIS Seniors Independent Selection team of 2019.

“(Jacob) reads the game very well, he’s got a good passing ability and he’s got a really good engine that gets him up and back,” McAndrew said.

“He’s got the ability to get up and down the park, and every modern-day fullback now needs that ability and to also create areas for good crosses and to get shots in the box.”

At the end of 2019, Farrell left the CCSC with the ambition to pursue a career as a professional footballer, something which the school’s previous Head of Sport (now Business Development Manager), Greg Brownlow, found fitting.

“I think it’s very hard to tell when any person is young where they are going to end up,” Brownlow said.

“I also think that Jacob from a young age had a good sense about football and he had a drive to be a footballer.

“Some kids talk about wanting to make [it to professional level] but they don’t particularly know what that means or they don’t put the effort in about that.

“Jacob has a game sense that you could argue is not taught; he seems to understand that really well and he’s always understood that well.

A Mariners debut now beckons for Farrell, potentially in the upcoming FFA knock-out fixture against Blacktown FC on Saturday, November 13.

“This is such a great opportunity that the club has given me in moving from the Academy to the First Team on a full-time contract,” Farrell said.

“It all happened so quickly, and I am so thankful to be surrounded by a great bunch of senior boys who can mentor me, and I think we can achieve good things this year.

“Monty [Nick Montgomery] has spoken to me on many occasions about what he expects of me this season and I strive to fulfil his expectations of my role in the team” Farrell said.

The Mariners have indicated an intention to begin Farrell at left back a position that, along with right and centre back, has become a common pathway for Academy players in reaching the A-League squad.

Other recent Academy recruits to this strengthening defensive line – one that last season maintained the third lowest goals scored against a 31 total – include Daniel Hall, Matt Hatch and Lewis Miller; players that Montgomery will have to choose between each week for the starting team.

“I’ve worked with Jacob previously and he is honest, hard-working, and always takes on board the instructions that we give him,” reported Montgomery.

“He puts his head down and gives everything in every session and that’s all you can ask for as a coach.

“He has a great engine on him, and we believe he has the potential to go a long way.

“He has shown in pre-season that he can challenge for that left back position and I am keen to see it unfold throughout the season.”

There is certainly pressure now on young Farrell’s shoulders, yet one source of confidence will be looking to his own grandfather as a role model with early Australian football experience alongside the great Johnny Warren.

From East Gosford, the late Terry Farrell was present on April 19, 1963 for the founding of Central Coast Football – then the Central Coast Soccer Association – as it broke away from Newcastle to seek its own destiny.

Jacob is the latest result of this legacy as he lifts the football flame of the Farrell family.